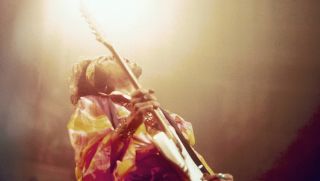 Billed as "one of the greatest and most anticipated, unseen treasures in musical history," the feature-length film, The Jimi Hendrix Experience: The Royal Albert Hall is scheduled to be screened to the public for the first time since it was shot 50 years ago.

The movie, which documents the last European performance of the original Experience lineup, will be shown at the London venue where it was primarily filmed on February 24, 1969.

Experience Hendrix L.L.C. and The Last Experience Inc, the company that originally documented the performance, have partnered for the event, scheduled for October 21.

Long considered a “lost” film, The Jimi Hendrix Experience: The Royal Albert Hall offers an unprecedented glimpse at the guitarist, capturing both an incendiary onstage performance of songs like Little Wing, Voodoo Child (Slight Return), Fire, Foxey Lady and Stone Free, as well as backstage goings-on and a post-show reception.

The film has never before been released on any format nor commercially screened anywhere in the world, and the authorized version to be shown at the Royal Albert Hall has been restored with remastered sound and color-corrected picture. The film’s soundtrack was mixed by longtime Hendrix recording engineer Eddie Kramer.

The screening is being touted as a one-night-only experience, with no plans for a further official release.

“This has been a long time coming but we always had faith that things would work out and the public would see this film that documents Jimi Hendrix at the very peak of his powers,” said Janie Hendrix, head of Experience Hendrix.

“As those who are fortunate enough to see the showing next month at the very place where it was filmed will know, it has been well worth the wait and we are nothing short of delighted. The single word that springs to mind that describes this truly monumental development is ‘historic.’ ”

For ticket information, head to the Royal Albert Hall website.