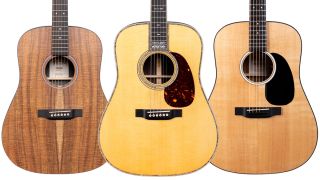 The American acoustic giant is heralding this latest Woodstock model as the most opulent of all, with a ‘1969-2019’ inlay, Woodstock dove atop the headstock, East Indian rosewood back and sides, and abalone inlay throughout.

Its interior label is hand-signed by C. F. Martin IV and two of the original Woodstock co-founders, Joel Rosenman and Michael Lang.

Other new releases include a koa update to the Road Series, with the D-12E and 000-12E both featuring environmentally conscious koa back and sides, bonded to a mahogany core.

Both models come fitted with the Fishman MX electronics system, and come with a new soft gigbag.

Read on for all the info, and head on over to Martin Guitar for more.