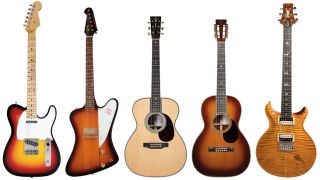 Guitar Center has enlisted some of the biggest names in electric and acoustic guitar for the launch of Eric Clapton’s 2019 Crossroads collection, which boasts some truly desirable recreations and fresh signature models.

Clapton, John Mayer and Carlos Santana have signed on to offer versions of guitars used at pivotal points in their careers, with models from Fender, Martin, Gibson and PRS all appearing under the same collection - a rare feat indeed.

So, yes, that means you can now get a replica of Clapton’s ‘Brownie’ neck-equipped Telecaster and Cream/Blind Faith-played Firebird I. Noice.

A large amount of the proceeds from the sale of each guitar will benefit Clapton’s Crossroads Centre Antigua, to aid recovering chemically dependent persons.

The guitars are available from Guitar Center now, while the collection officially launches at the 2019 Crossroads Guitar Festival in Dallas, TX on 20-21 September.

PRESS RELEASE:  In February 5 and 6, 1968, Clapton appeared with Cream in the Danish movie “Det var en lørdag aften” performing with a Fender Telecaster, a 1964 Fender Telecaster Custom (bound) in 3 Tone Sunburst, but fitted with a Stratocaster neck with rosewood fingerboard. This guitar, with modifications, would go on to be associated with his tenure in Blind Faith.

Observant guitar aficionados have noticed something peculiar about this guitar during the Blind Faith era – its neck had changed to the very same maple fingerboard Stratocaster neck as Clapton’s classic “Brownie” 1956 Fender Stratocaster, played by Eric a few years later during the Derek & The Dominos era. On June 7, 1969, Blind Faith had their debut concert in front of more than 100,000 people at Hyde Park in London. Eric was seen playing what to most people was a completely unknown guitar – a sunburst Telecaster with a maple Stratocaster neck. This, of course, was the same guitar he was seen wielding on a few rare occasions with Cream, although the old rosewood neck was now gone.

This neck was grafted on to the Telecaster by either Clapton himself or a guitar technician; either way, it suited Clapton’s playing style well and is among his most iconic instruments. For the first-time ever, the Fender Custom Shop Eric Clapton Blind Faith Telecaster by Fender Custom Shop Master Builder Todd Krause offers a Tele body with a “Brownie” style Strat neck – a historic first that marks this guitar as a true rarity.

This guitar will come with a certificate of authenticity signed by Clapton himself and a replica of the strap he used in 1969.

PRESS RELEASE: A legendary instrument associated with both Cream and Blind Faith is Clapton’s 1964 Gibson single-pickup Firebird I with reverse headstock. Clapton purchased this instrument in 1968 in Philadelphia. This guitar subsequently appeared on the Cream farewell tour in late 1968 and served as a direct replacement of Clapton’s Gibson SG “The Fool” – which by that time lost a good amount of its custom paint job due to extensive use.

The reverse-headstock Firebird I was used as one of Clapton’s instruments on the Blind Faith tour in 1969. The guitar obviously had no pickup switch, and therefore only two knobs (volume and tone) and was equipped with a wraparound tailpiece. This was also the first Gibson solid-body to feature a neck-through-body construction, with the neck itself being made up of five pieces of mahogany with four narrow strips of walnut mingled between them for more strength.

Each 1964 Firebird I will also feature an Eric Clapton signed backplate, a reproduction of the guitar's original case, a Certificate of Authenticity booklet and more.

The guitar features a 000-14 fret body, Sitka Spruce “VTS” top and Ziricote back and sides. Martin’s proprietary VTS (vintage tone system) process is a torrefaction / aging regimen, resulting in a particularly beautiful tone. This guitar also includes a titanium truss-rod which combines the light weight of a 1930’s instrument with the adjustability of modern technology.

This model will come with a certificate of authenticity signed by Clapton himself, and Chris Martin.

Get the Martin 000-42EC Crossroads Ziricote from Guitar CenterView Deal

This guitar also comes with a certificate of authenticity signed by John Mayer himself and Chris Martin.

PRESS RELEASE: PRS Private Stock Carlos Santana Crossroads Paul Reed Smith guitars have been associated closely with Carlos Santana for several decades. In fact, before PRS achieved worldwide acclaim as a top guitar manufacturer, its founder and namesake was hand-building gorgeous instruments that would serve as the prototypes for his prestigious brand.

One of these guitars was personally commissioned by Carlos Santana pre-1985, an instrument still owned and cherished by Santana.

The PRS Private Stock Carlos Santana Crossroads is a tribute to this guitar, featuring original specifications combined with PRS's most current design elements to give serious players and collectors the best of both worlds. Specifications include a pre-’85 body shape and headstock (with eagle inlay), 24 1/4” scale, 24-fret Brazilian Rosewood fretboard, bird inlays, HFS and Santana humbuckers, and twin mini-switches for coil tapping. Only six of these instruments will be made and each will come with a certificate of authenticity signed by Carlos Santana. As with all PRS Private Stock guitars, a Certificate of Authenticity signed by Paul Reed Smith and PRS Director of Private Stock, Paul Miles, will also be included.