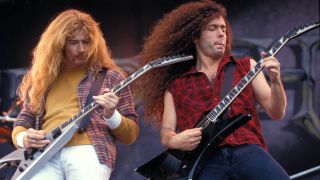 Dave Mustaine has long intimated that his inability to bring former Megadeth electric guitar player Marty Friedman back into the fold several years ago was due to a disagreement about finances.

Now, Friedman, who left Megadeth in 1999, has gone on record stating that money did indeed factor into his decision to not rejoin the band following the departure of guitarist Chris Broderick in 2014.

At the time, drummer Shawn Drover had also left the group, and Mustaine and bassist Dave Ellefson were looking to resurrect the famed Rust in Peace-era lineup with Friedman and drummer Nick Menza.

"My main thing was I'd be happy to do it, but I'm not going to take less money than I'm already making to do it," Friedman says (via Blabbermouth) in Mustaine’s new book, Rust In Peace: The Inside Story of the Megadeth Masterpiece.

"I'd been in Japan for more than ten years cultivating a career with solid rewards. I was making money not only for myself but also for my management and staff. My manager has been with me 15 years.

"Everything was sound and solid professionally, and when the offer came up to all of a sudden join Megadeth again, as long as I would not be making less money, I was ready to go. But I was certainly not going to take a loss to join a band that, frankly, at that point, didn't seem like they had too much to offer musically. A couple of members of the band had recently quit, and musically I hadn't heard anything that they've done in a long time. I didn't know about how relevant they continued to be in the music business.

“It wasn't like Megadeth was on the tip of people's tongues, at least not in Japan. I had reached the point where people stopped immediately connecting me to Megadeth and were talking about the things that I had done in Japan."

Friedman also states that he turned down the offer in part due to the fact that, at the time, Megadeth was viewed as something of Mustaine’s solo band, with a high turnover rate among members.

"Had it been more of a band situation and not such a one-man, Dave Mustaine-main-man party, I might have considered doing it for a little less," he said. "But, at the end of the day, Megadeth is so much Mustaine because that's the way he engineered it. I didn't feel that kind of camaraderie, the four-man diamond, the Beatles, Kiss, Metallica.

"I felt like I would be going out there and tour and it was going to be Mustaine's big success. If I'm going to do that, I'm certainly not going to lose money to do that; I was doing great on my own in Japan."

In 2010, Mustaine talked to Guitar World about working with Friedman in the studio during the recording of Rust in Peace, saying, “We just did what we did. And it worked because of the differences in the dynamics of our playing. You had ‘the fire and the ice,’ as people used to say about us. Love and hate, you know?

“And I thought it was really cool to have a player who was so different from me but who was also coming from a similar place. Because the guy that was there before Marty [Jeff Young] was a big fan of Tony MacAlpine, and I wasn’t. And the guy before him [Chris Poland] was a big fan of Mahavishnu Orchestra, who I did like, but still… So we had had a bunch of different types of guitar players in Megadeth. When Marty came in it was like, 'This is what we like. This is what we need.' ”

Rust In Peace: The Inside Story of the Megadeth Masterpiece is available now. Mustaine will be speaking about the book on September 11 at 4 p.m. EST in an event held by Politics and Prose Bookstore in Washington, D.C. For more information, head here.