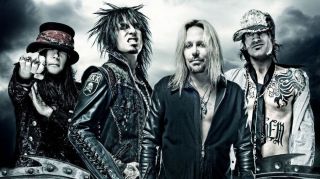 The Motley Crue film based on their 2001 biography, The Dirt—Confessions of the World's Most Notorious Rock Band has received an official release date.

This past summer, the band members also revealed that they were in the studio recording new music with producer Bob Rock, who helmed the band’s 1989 album, Dr. Feelgood, as well as their 1994 self-titled effort. That music was eventually confirmed as four new songs for the movie.

He continued: “But the only way to take advantage of those opportunities is to end things with dignity. If you crumble and you fall apart at the seams and then try to do that stuff, people are like, ‘Oh, look, Mötley Crüe. They were cool once.’ But I want the fans to have more than that. I want them to have the pride that they have in certain bands and that I have in certain bands that left at the right time. So it’d be real easy to slap our name on anything and everything that comes our way, but we’ve always been very careful to not do that.”