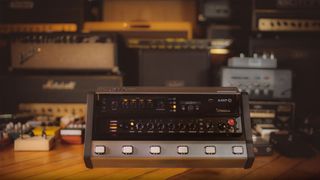 It’s the culmination of Blug’s four decades working as a sound designer, incorporating the Neural Analog Nanotube Amp design which he describes as a “virtual soldering iron” to edit and save analog circuit parameters at a component level, with enough power and flexibility to dial in just about any tone imaginable through one lightweight, pedal-sized box.

The AMP X will also be supported by an online library of highly collectable and sought-after amps, effects and cabinets. Whether it’s ultra rare classic vintage combos or discontinued high gain metal monsters you’re after, the AMP X will help recreate pretty much any guitar tone out there.

And while that might sound like a bit like diving in the deep-end, the controls are incredibly straightforward and user-friendly, with a second panel hidden under an aluminum flap.

It also carries tones from BluGuitar’s highly revered AMP1TM Mercury and Iridium Editions, and offers a Dynamic IRTM stereo speaker emulation/recording output and total flexibility in terms of inputs and outputs. Which means - whether you’re working in the studio or on the stage - you’re covered on every front.

For more information, head to BluGuitar