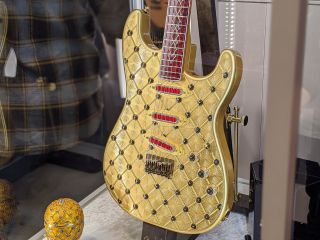 NAMM 2020: Fender have announced a plethora of new Custom Shop electric guitars ahead of this year's show, including additions to the Custom Artist Collection for Jimmy Page and Eric Johnson. The American guitar giant has also entered the new decade with the introduction of the Annual and Prestige collections.

While the Annual Collection has been conceived to showcase the latest innovations and developments at the Custom Shop, the Prestige Collection is a range of guitars, each built by a single Fender Master Builder with no limit whatsoever on budget.

This guitar is a faithful recreation of the Telecaster Jimmy Page used in Led Zeppelin's early days and on the band's groundbreaking self-titled debut album, which has gone on to become one of the most acclaimed and influential debut albums in rock history.

His original Tele was given to him by Jeff Beck, world-renowned guitar legend and Page's predecessor in psychedelic blues-rock outfit, The Yardbirds.

Page quickly modified the guitar, adding eight distinctive round mirrors to its body in order to, in his own words “make it sort of almost kinetic” and “a channeling vehicle for music.

In keeping with Page's original model, the Jimmy Page Signature Telecaster features a two-piece ash body with an off-center seam, with an eight-hole pickguard and Journeyman Relic lacquer finish.

The guitar also features a tinted maple neck with a custom Jimmy Page 1959 profile, a flat-lam rosewood fingerboard with a 7.25” radius and vintage-upgrade frets, and two hand-wound 1958 Telecaster pickups.

In 1988, Eric Johnson made his debut at Austin City Limits music festival, delivering an stunning performance that catapulted Cliffs of Dover to number 5 on the Billboard Top 100.

Virginia, a rare, modified, sassafras-bodied 1954 Stratocaster (named after a label found inside the pickup) fueled this career-defining moment.

The Eric Johnson Virginia Stratocaster is limited to only 50 models available worldwide, and is built by Master Builder Carlos Lopez.

According to Fender, every year the Custom Shop’s Master Builders are given a challenge to build a guitar with no boundaries. The result of that creative exercise in 2020 is the Prestige Collection. With one guitar created by each Master Builder, these are the guitars in this top-of-the-range collection.

For the Stratocaster 1, Thorn drew on the similarities between the Fender Stratocaster and the Saleen 1 super sports car.

The Coronation Stratocaster is inspired by the Coronation Egg made in 1897 to commemorate the inauguration of Tsar Nicholas II and Tsarina Alexandra on the Russian Imperial throne.

The guitar looks as royal as the name would suggest, donning a gold leafed surface with an on-wood Guilloche and gilded silver artwork. Also featuring custom fabricated diamond eagle medallions, along with hundreds of diamonds throughout the instrument, the price of this stunning instrument quickly makes sense.

For anyone lucky enough to be able to afford this beauty, it'll even come with a limited edition vintage recreation of the Coronation Egg.

With 3D-style painted artwork, this doubleneck Tele is truly one-of-a-kind.

"I wanted to create something that looked beautiful, but also be totally playable and sound amazing," says Master Builder John Cruz. "This guitar is for anyone who dares to be different.”

This model celebrates the 70th anniversary of the Telecaster, and showcases a birdseye rosewood top with NOS Argyle Sparkle finish and black back and sides.

The Argyle Telecaster by Dennis Galuszka

The Argyle Telecaster was designed in collaboration with virtuoso Fender painter Jay Nelson. “We have an amazing in-house painter in Jay and I am a total sucker for sparkle paint jobs and patterns within a sparkle,” says Galuszka.

And just like that, The Argyle Telecaster was born.

The Swagger is based on Fender's Swinger design, but takes on a fittingly updated name due to the changes applied to the model.

It features a roasted figured maple neck and a headstock with curves similar to the body. The guitar also features a 25.5” scale length, a custom bridge, custom top mount and hand-built high output silver foil pickups by esteemed US pickup designer Curtis Novak.

Master Builder Carlos Lopez teamed up with the highly regarded artist Pamelina to create this guitar which can only be described as a jaw-dropping work of art.

The guitar is also the manifestation of one of Lopez's dreams as an apprentice luthier. "I told myself I was going to work with Pamelina when I became a Master Builder," he said.

This guitar is built using reclaimed wood from the wine barrels of its namesake, which over the decades has developed a natural red stain from the wine that was made within it.

In order to showcase the character of the old wood, McMillin has coated the guitar in a super thin permalac finish.

In a manner fitting the guitar's visual aesthetic, this one-of-a-kind model also features cork knobs and tarnished raw hardware, as well as a Twisted Tele neck pickup and a Broadcaster bridge pickup.

Master Builder Jason Smith has collaborated with pyrography artist Madeline Hanlon to create this Custom Shop model. Pyrography is the art of decorating wood with burn marks resulting from the controlled application of a heated object such as a poker.

During the conceptualization of this instrument, Smith was inspired by the 70th anniversary of the Fender Esquire, as well as the Indian floral prints often found on tapestries and clothing.

Boasting a rather unique look, the guitar is finished in a hand-mixed transparent teal with a slight burst covered in NOS lacquer, and features gold hardware.

The Tamo Ash Esquire was inspired by a piece of Tamo Ash wood Master Builder Dale Wilson saved years ago for a special project.

“The figuring on this piece of Tamo Ash was incredible, and I’m a sucker for a Honey Burst paint job,” he says.

For more information on this year's Custom Shop releases, head to Fender.