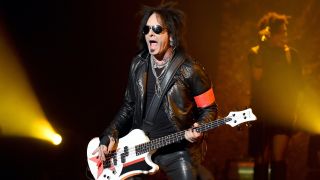 Ever wonder who the most underrated bass player is? According to Mötley Crüe’s Nikki Sixx, the answer is easy: he is.

After Twitter user @TonesofMusic posted the question, “Who is the most underrated bass player ever?” on August 13, another user, Jody Bednar (@jlbednar), replied by tagging the Crue man’s Twitter handle.

Which led to Sixx himself chiming in with a one word answer: “Me.”

In a 2015 interview with For Bass Players Only, Sixx, who is also Mötley’s primary songwriter and lyricist, elaborated on his bass style – which, admittedly, has long been overshadowed by his band’s look, sound and antics.

“I feel my spot is somewhere between a bass player and a rhythm guitar player," he said. "I play with a pick. I play very aggressively. I always have a distortion pedal in line, and I play less melodies and do more stuff against the guitars that create melodies.”

Sixx continued, “Song is king for me, so as long as the song is soaring I’m in my pocket, and then I figure out what I can do to make the song better. In a song like Too Young To Fall In Love, for example, the bass moves from the A to the G to the F, and then towards the end it does the A to the B to the C and it walks up – the same melody line but we just kind of wrap it around a different way.

“It’s those simple little things that are what people remember.”