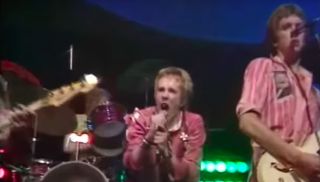 British journalist Charles Shaar Murray described it as "the most utterly immediate thing I've ever seen on television”: On this day in 1976, the Sex Pistols made their U.K. television debut, performing a blistering version of “Anarchy in the U.K.” on So It Goes, a late-night program hosted by English music impresario Tony Wilson.

“Get off your arse!” Johnny Rotten screams before the band, with Steve Jones on guitar, tear into the song. Three minutes later, music history has been made.

Check out the performance below.