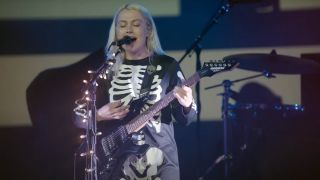 It’s been a while since we’ve been able to navigate our way to the front of a show and ogle the onstage gear, but thankfully we’ve still been able to clock a few surprise guitar choices during online performances – and indie fave Phoebe Bridgers has certainly set our six-string surprise senses a-tingling with her latest squeeze, BC Rich’s none-more-metal Warlock.

As part of Visible’s Red Rocks Unpaused series of live-streamed concerts on September 1, Bridgers pulled out the 24-fret Bronze by BC Rich model for Kyoto and ICU, two open-tuned tracks from new album, Punisher.

The performance – which has now been uploaded to YouTube by one enterprising user – is a welcome reminder that electric guitars are often a lot more versatile than their looks might suggest, as the Warlock provides some surprisingly dreamy cleans when paired with Bridgers’ shimmering chord voicings.

“I try to trick myself to write a song in an open tuning and not even worry about what the chords look like and focus on the melody instead,” Bridgers told us earlier this year. “I’ve learned so much about my favorite gear that way, as well as my favorite chords and tones.”

During the performance, Bridgers also plays her trademark Metal Flake-finished Danelectro ’56 Baritone, as well as a “totally murdered-out” Waterloo acoustic, which she received from Conor Oberst.

Co-guitarist Harrison Whitford, meanwhile, leans on a heavily modified Seafoam Green Telecaster for much of the set, and lays down a killer solo for Punisher’s epic closing track, I Know the End.

The unlikely Bridgers/BC Rich pairing brings to mind that time John Mayer dug deep into his collection to pull out a Bubblegum Pink Jackson Dinky for an Ellen performance of Still Feel Like Your Man.

What’s next? Julien Baker digging into a Dean Razorback? Bon Iver tearing up a Flying V? Taylor Swift rocking an ESP Eclipse? Make it happen. Make it all happen.