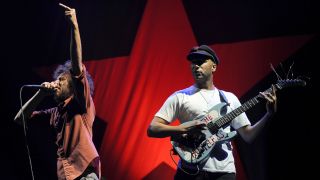 While Tom Morello has certainly remained active these past few years, the electric guitar player hasn’t performed a show with Rage Against the Machine since 2011.

That’s all about to change, as the band (or, well, someone associated with the band) took to their newly-created Instagram account to announce a series of 2020 gigs, including two Coachella appearances.

While the members themselves – Morello, singer Zack de la Rocha, bassist Tim Commerford and drummer Brad Wilk – have yet to comment, Forbes is reporting that Wayne Kamemoto, a longtime associate of the band, confirmed that "the band's social media is accurate."

Rage played their last show at the L.A. Rising Music Festival in July, 2011. Since then, Morello, Wilk and Commerford joined Public Enemy's Chuck D and Cypress Hill's B-Real in Prophets of Rage, while de la Rocha recorded as a solo artist.

Rage Against the Machine’s return, perhaps not coincidentally, comes as the 2020 presidential election kicks into high gear. While venues have yet to be announced, the confirmed dates are: March 26 in El Paso, Texas; March 28 in Las Cruses, New Mexico; March 30 in Phoenix; and April 10 and April 17 in Indio, California.

For more information, keep your eye on RATM.

In the meantime, Morello will be hosting his own Guitar Revolution camp, which takes place in January 2020 at Newport Beach, CA, and features the likes of Nuno Bettencourt, John 5, Billy Howerdel and many more.