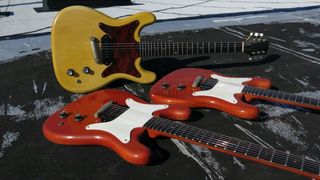 UPDATE (07/14): Gibson has issued a statement in response to Satellite Amplifiers, stating it “must protect itself from this and other similar opportunistic tactics”.

“The Epiphone Coronet was first introduced in the 1950s, which clearly established first use of the trademark,” the statement reads. “More recently, Gibson has been continuously manufacturing and providing the Epiphone Coronet for a limited number of Artists since 2008. This establishes historic (trademark) rights and continuous use (since 2008).

“As a result of creating, launching, investing, and owning the trademark for the Epiphone Coronet, Gibson simply filed to confirm their trademark ownership on a ‘first-use’ basis.

“Gibson did not file a lawsuit. Gibson did, understandably, file for trademark ownership and requested to cancel their (Satellite’s) mark within the USPTO as Gibson is clearly the original owner, has clear first use and thus exclusive trademark rights.”

You can read the full statement here.

According to an Instagram post from Satellite Amplifiers, Gibson is allegedly pursuing legal action against the San Diego-based company's use of the Epiphone Coronet electric guitar design on a range of instruments.

“I wanted to give everyone a heads up about what's been going on with the Coronets,” begins a July 11 post from Satellite Amplifiers’ Adam Grimm. “Gibson Guitars is attempting to invalidate my Federal Trademark for the Coronet.”

The post goes on to allege, “I know that Gibson abandoned the model in 1999, and never bothered to even attempt to protect the model or keep it alive. Ever. Until now. Why?

I wanted to give everyone a heads up. There is no immediate rush, but things will come to a head in the next few weeks. I hope you are all well. Thanks. satelliteamps

“Because myself and a few others have brought it back to life, and introduced it to a new audience that never even knew the model existed.”

The original Coronet was first manufactured by Epiphone in 1959 and remained in production until the 1970s.

Satellite began building its own version of the Coronet in 2016, and Grimm claims at the 2017 NAMM show “Gibson reps came down and photographed the Coronets, and even talked with us a bit. They have known about the guitars since then.”

Grimm goes on to state that after receiving legal notice from Gibson, he and his legal team responded with a letter in which he “made [Gibson] an offer to purchase the brand as a measure of goodwill and good publicity,” and for “half of what it will cost either of us to fight this out” in court.

Grimm says he has yet to receive a reply.

As for next steps, he writes, “I am still going back and forth through my options.”