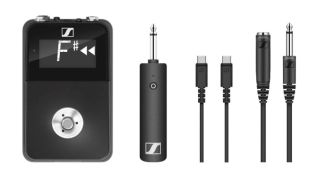 Sennheiser has added to its XS Wireless Digital series with the new entry-level XSW-D Pedalboard Set.

The easy-to-use system works on 2.4 GHz digital transmission for worldwide operation and includes a transmitter, a pedalboard-style receiver with guitar tuning function, an instrument cable, belt clip and powering and charging accessories.

Plug the transmitter into a guitar or bass, power the receiver via a pedalboard or the included power supply unit, and – voila! – the two are linked by the push of a button.

Additionally, the tuner boasts a large-format, black-and-white display for ease of reading in low-light conditions, and is engaged via a footswitch on the receiver. Hit it once to mute the audio and then again to reactivate after tuning is complete.

The transmitter has a battery life of approximately five hours, and can be recharged from the powered receiver during pauses in use, while the receiver boasts a balanced XLR audio output and an unbalanced jack output for connection to an amp or mixing desk.

You can also link up as many as five XSW-D systems at once.

The XSW-D Pedalboard Set sells for $399.95. For more information, head to Sennheiser.