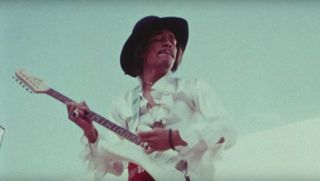 Over six decades on from its inception, the Fender Stratocaster remains one of the archetypal electric guitars.

The iconic double-cut has been wielded by some of the very finest guitar players of all time, and here we pay tribute to some of their landmark releases.

It is still mind-blowing to recognize that most of the otherworldly sounds on this album were created solely with a Strat, a handful of pedals and some clever studio tricks.

But as impressive as the album is sonically, it’s Hendrix’s virtuoso performances on “Still Raining, Still Dreaming,” “House Burning Down” and “Voodoo Child (Slight Return)” that make it essential.

Ritchie Blackmore had many moments of brilliance on Deep Purple’s previous albums, but Machine Head is a showcase for his virtuosity, from the slashing intro chords and blazing solos of “Highway Star” through the pummeling riffs of “Smoke on the Water,” “Lazy” and “Space Truckin’ ” to the last fading sweet, bluesy licks of “When a Blind Man Cries.”

Lazily categorized by critics as a Hendrix protégé, Trower developed his own unique voice, characterized by the thick, swirling Uni-Vibe and wah-wah textures that he used to great effect on songs like “Day of the Eagle.”

From the ominous chills of the title track to the pimptastic funk of “Too Rolling Stoned,” this album provides a fantastic voyage of compelling rhythmic grooves and charismatic solos.

A handful of Malmsteen’s phrases on this solo debut may be reminiscent of Uli Jon Roth, Blackmore and even Hendrix, but the bulk of his playing on it introduced an entirely new language for guitarists to analyze and decipher.

Since then, others may have matched his speed, but few have topped his incredibly detailed articulation and fiery tone.

Beck’s Seventies albums are rock-jazz-fusion archetypes, but with Guitar Shop he invented a new genre that can only be called Jeff Beck music, because no one but Beck has ever sounded like this. Released during the height of Eighties shred mania, this album blew the doors off the competition like a nitro-fueled dragster racing a stock car.

Although Johnson called his first album Tones, he should have saved that name for this album, which is characterized by his sweet, singing violin-like solos, razor-sharp rhythm textures, and some of the finest chorus effects known to humanity.

But even more impressive is Johnson’s innate sense of melody that pervades even his most incendiary licks.