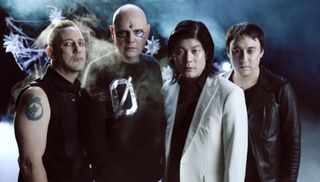 Following their Shiny and Oh So Bright reunion tour, Smashing Pumpkins have announced a string of 30th anniversary live shows that will kick off November 28 in Madison, Wisconsin. Tickets for the shows will be available at SmashingPumpkins.com beginning 10:00am local time on Friday, October 5.

As previously reported, Smashing Pumpkins have officially announced a new album, Shiny and Oh So Bright, Vol. 1 / LP: No Past. No Future. No Sun, due out November 18. The record is the band's first in 18 years to feature Billy Corgan alongside original members James Iha and Jimmy Chamberlin. Also part of the lineup is longtime Pumpkins guitarist Jeff Schroeder.

Shiny and Oh So Bright, Vol. 1 / LP: No Past. No Future. No Sun was recorded at Shangri La Studios in Malibu with producer Rick Rubin. The effort boasts eight new tracks, including “Silvery Sometimes (Ghosts)” and “Solara.” You can pre-order the album here.

The 30th anniversary tour dates are: