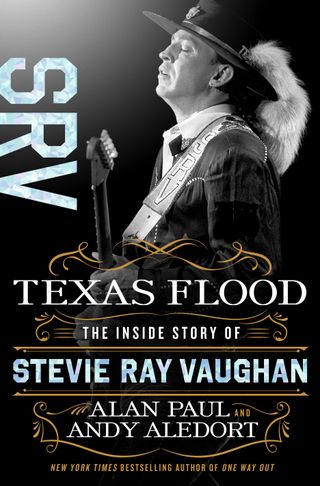 Longtime Guitar World writers and editors Alan Paul and Andy Aledort have collaborated on Texas Flood: The Inside Story of Stevie Ray Vaughan. St. Martin’s Press will release this definitive biography of the guitar legend on August 13, 2019. This is the first time the cover has been seen.

Texas Flood will provide the unadulterated facts about Stevie Ray Vaughan from those who knew him best and were with him throughout every stage of his life and career: his brother Jimmie, his Double Trouble bandmates Tommy Shannon, Chris Layton and Reese Wynans, and many other friends, lovers, family members, fellow musicians, crew members and managers. The book also includes insights from Vaughan himself; Aledort interviewed him four times.

All material in the book comes from first hand interviews by the authors. Paul and Aledort interviewed over 100 people, including Vaughan guitar heroes like Buddy Guy, B.B. King and Eric Clapton and peers like Billy Gibbons, Joe Perry, Eric Johnson and Warren Haynes. Texas Flood also includes over 170 photos, many never before seen from the private collections of the Vaughan family, Layton and Shannon.

In the summer of 1990, a clean and sober Stevie Ray Vaughan seemed poised for a new, limitless chapter of his life and career just a few years after his severe addiction to cocaine and alcohol almost killed him. His last album, In Step, had been his most successful, both critically and commercially. He had completed Family Style, his first collaboration with big brother Jimmie, his first and greatest musical hero, and looked forward to the album’s release. His tumultuous marriage was over and he was deeply in love with a supportive, creative woman.

Instead, it all came screeching to a sudden, tragic end when Vaughan was killed in a helicopter crash on August 27, 1990, following a dynamic performance with Eric Clapton, leaving an endless stream of What ifs. He was just 35 years old. In the ensuing 28 years, Vaughan’s legend and acclaim have only grown; he is an international musical icon. Despite the cinematic scope of Vaughan’s life and death, there has never been a truly proper accounting of his story. Until now.

Preorder the book now at Barnes and Noble or visit the St. Martin’s Press website for more information.

Alan Paul is the author of the New York Times bestseller One Way Out: The Inside History of the Allman Brothers Band. Andy Aledort is one of the world’s most renowned guitar journalists and instructors, and has toured and recorded with Jimi Hendrix bandmates Mitch Mitchell and Buddy Miles, with Stevie Ray Vaughan’s band Double Trouble, and with Dickey Betts of the Allman Brothers Band.