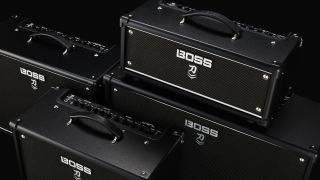 Boss’s Katana series has been a revelation in the sub-$500 guitar amp arena, and the Japanese effects giant has seen fit to equip it with a whole load of new features and increased versatility for 2019.

You can now employ up to five effects categories simultaneously, as opposed to the original’s three, and the independent booster, mod, FX, delay and reverb sections boast three variations each for a total of 15 effects.

In a smart, forward-thinking move, Katana MkII models can be used as a power source for a preamp, amp modeler or multi-effects pedal via a rear Power Amp in jack.

100-watt Katana MkII amps also include a Stereo Expand feature, which allows you to link two amps together with just one regular cable.

As before, Boss’s Tone Studio affords you the ability to tweak a wide variety of amp and effects parameters, as well as a high-pass filter and adjustable gain for the Power Amp In - and yes, you can import your patches from first-generation Katana models.

The Katana series was already an impressive range, but with these new tweaks and additions, the MkIIs could well end up being the best guitar amps under $500.

Prices for each model are as follows: