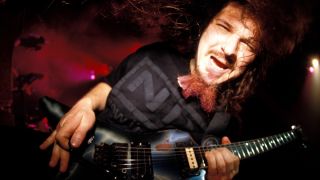 The long-running copyright dispute battle between Buddy "Blaze" Webster – a childhood friend of Darrell “Dimebag” Abbott who played an instrumental role in the creation of the Pantera axeman's iconic Dean From Hell electric guitar – and Dean Guitars appears to have finally come to an end.

On April 17, an 11th Circuit appeals court rejected Webster’s challenge to a federal judge’s dismissal of his copyright lawsuit against Dean Guitars and its parent company.

The court found Webster waited too long to sue.

According to Courthouse News, the 11th Circuit agreed with the federal court that the period in which Webster could have sued expired “years before” he filed his 2017 federal lawsuit.

“Webster presented little or no evidence that Dean intended to misappropriate his goodwill in the sale of the DFH reissues,” U.S. Circuit Judge Charles Wilson wrote.

“Rather, he presented video interviews that show him, several years after he became aware of the DFH reissues, willingly discussing the history of the DFH to promote his legacy and sell his own guitars.”

As previously reported in Guitar World, in April 2017, Dean, along with the Darrell Abbott Estate and multiple additional defendants (including Dime’s brother, Pantera drummer Vinnie Paul Abbott, who passed away in June 2018) were served with a copyright infringement lawsuit by Webster, a luthier, who contended that he created the guitar’s famous lightning storm graphic and had never received compensation for its reproduction on various Dean models.

But a summary judgment entered in the Middle District of Florida in 2018 ruled in favor of Dean and the Abbott Estate, citing that the statute of limitations for Webster  – who had been aware of the various Dean from Hell models produced over the years, and who had also collaborated with Dean on another line of guitars, the Buddy Blaze ML – to bring his copyright infringement claim had long expired.

In February, Webster’s attorney argued to a three-judge 11th Circuit panel that the designer is entitled to a trial in the case and asked the judges to reverse the lower court’s decision.

The latest decision appears to signal an end to the case.

Webster’s attorney, Eric Bjorgum of Karish & Bjorgum spoke with Courthouse News following the ruling, stating that Webster was at least satisfied to be recognized as the creator of the guitar.

“We really wanted to set the record straight,” Bjorgum said. “No one else in this whole case has stepped up to claim the copyright and all the interested parties were involved.

“This was about protecting [Webster’s] friendship and protecting the legacy of the guitar.”