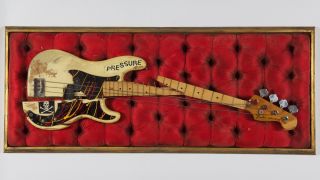 The Clash’s iconic 1979 album London Calling will be celebrated in a new exhibit at the Museum of London.

The display will host a slew of memorabilia and artifacts from the Clash Archive, chief among them the Fender Precision bass that was captured mid-smash in the hands of Paul Simonon for the album’s cover art.

The destroyed instrument, which met its untimely end onstage at New York City’s Palladium on September 21, 1979, will be on display alongside more than 100 personal items, including Joe Strummer’s typewriter and notepad used to record ideas and lyrics, Mick Jones’ handwritten notes regarding the album’s sequencing, a pair of Topper Headon’s drum sticks and an assortment of stage clothes, archival photos and video footage.

The free display opens November 15 and runs through spring 2020.