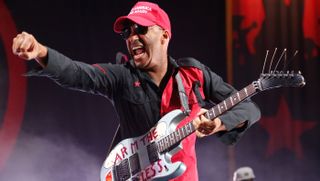 The Rage Against the Machine electric guitar player recently went off on what he sees as a lack of discipline amongst those who could be tomorrow’s six-string revolutionaries.

“I’m disgusted by the fact that a lot of young people these days aren’t willing to sit down and practice the electric guitar for eight hours a day,” he told Metal Hammer.

“They are all looking for an easier route to becoming famous. Look at the Top 50 songs on the radio in the US – there are no guitar solos in them.”

Young people are practicing guitar - but they’re trying to forge careers, too

He continued that he sees his 2018 all-star solo EDM crossover album, The Atlas Underground, as a Trojan horse in the charts: “I want it to turn a new generation of kids on to cranking up the guitar.”

All that said, Morello also added that even if you were to hunker down and woodshed, don’t expect your band to be the next Rage Against the Machine or Metallica.

“In this current climate, there really is no record industry,” he said. “If a new Metallica or a new Rage Against The Machine came along, there’s not the apparatus to shove it down the world’s throat that there was 20 or 25 years ago.”

But, he added, the good news is that “the distribution of music is much more democratic. You, me and the guy walking down the street outside can all make an album on our phones, we can all have a Facebook page to put it out there.”

Playing devil's advocate, we'd argue that all that time guitarists spend making and promoting albums themselves might be what's eating into that elusive eight-hour practice time - and it's done in the name of having a career in music, rather than in pursuit of fame...