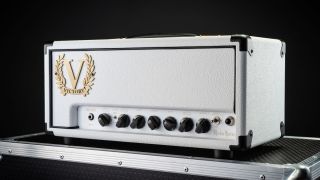 Victory Amplification teamed up with Richie Kotzen in 2017 for the RK50 Series of guitar amps, and now the company has announced a new collaboration with the guitarist, the rather spectacular Richie Kotzen RK100 Custom Limited Edition.

Each amp is individually numbered and signed by Kotzen, with the run limited to just 20 pieces in total.

Additionally, a low-power mode makes it possible to attenuate the amp down to 30 watts, while a bias switch allows for the option of swapping the EL34 power amp tubes for 6L6 valves.

In place of a traditional two-channel/four-input setup, the RK100 CLE features Normal and Bright channels (with additional bright switch) with a single input; the channels can be used independently or mixed together.

Victory is offering the amp, finished in a sharp white/black/gold color scheme, for £1,999.00 (approximately $2,465) through direct order only. For more information, head over to Victory Amps.