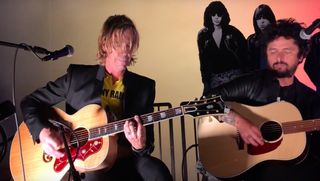 This past Sunday, August 26, an all-star cast gathered at the Hollywood Forever Cemetery to pay tribute to Ramones guitarist Johnny Ramone, who died from prostate cancer in 2004. Organized by his widow, Linda Ramone, the annual event  benefits the Johnny and Linda Foundation and Dr. David Agus at the Center for Applied Medicine, and features art installations, movie screenings and memorabilia displays. But the highlight this year was undoubtedly an acoustic jam that brought together Guns N’ Roses bassist Duff McKagan, Green Day’s Billy Joe Armstrong, Sex Pistols guitarist Steve Jones and actor Fred Armisen for a set that included “Rockaway Beach,” “Danny Says” and “Judy is a Punk,” among other songs.

Said Armstrong about the Ramones in an interview with Forbes: "They seemed like a family, with the name and a gang or something like the Del-Lords or some kind of New York bunch of barbarians that could wield around a baseball bat.

“They're known, just the leather jackets, the jeans and the thing I liked about them is they didn't really play up the fashionable English mohawk punk. They were very American and very Americana. They got what the aesthetic was, especially for Johnny, who was a very proud American. So that sort of symbolized the Ramones."

Check out some highlights from the performance below: