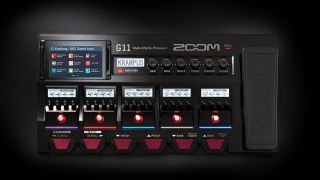 Once the go-to name in multi-effects pedals, Zoom has been quietly launching incremental updates to its long-running G series for years, but now, it finally looks to have a competitor to Line 6’s market-dominating Helix, with the astoundingly fully featured G11.

Physically, the G11 is notable for featuring a 5” color touchscreen display - similar to that found on the HeadRush Pedalboard - with dedicated switches for scrolling signal chain, patches and banks, as well as five switches for individual effects and an onboard expression pedal.

It boasts 48 amp and cab models, teamed with 70 built-in Impulse Responses, and the ability to add 130 of your own - these include the usual suspects, as well as original models from Zoom that aim to improve on the sound of the originals.

Zoom has yet to release a full list of effects, but the company has promised all-new sounds utilizing filtering, signal doubling and pitch-shifting algorithms.

The G11 also functions as a complete audio interface for direct recording via USB (Cubase LE is included). Other connections include a pair of effects loops, aux in, stereo outputs and MIDI connectivity.

You also get a five-minute looper thrown in, as well as 68 rhythm patterns for home jamming, and the whole thing is compatible with Zoom’s Guitar Lab 6.0 app for browsing, uploading and downloading patches.

One amp model and up to nine effects can be run simultaneously, and the unit runs from a 12V DC power supply, providing 2,000mA.

On this evidence alone, Zoom has returned with a multi-effects unit and amp modeler with the potential to compete with the industry leaders.

Of course, a competitive price tag helps: the G11 is available to preorder from Sweetwater for $799 - that’s $400 less than the Helix LT and $200 down from the HeadRush Pedalboard.

There’s no word on an official launch date yet, but for more information, head over to Zoom.