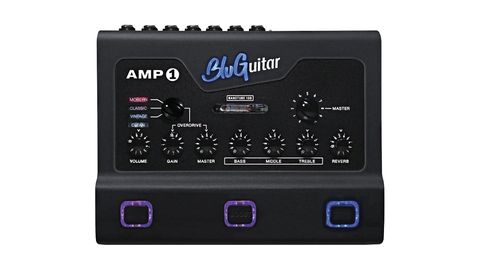 What a time to be alive - amplifiers and cabs at our feet! Well, in modeled form, at least. But that counts for more now than ever, as the likes of Line 6, Helix, Kemper and Fractal have raised the game in recent years.

BluGuitar’s first Amp1 impressed us on its release in 2014, but it was a different proposition than the modeling crowd in that it offered a tube-driven power section with an all-analogue signal path.  It’s the brainchild of German pro guitarist and former Hughes & Kettner engineer, Thomas Blug.

This is the latest edition of his Amp1, and it’s not to be confused with Strymon’s recently released Iridium amp modeler. The chemical element iridium is from the platinum group, and BluGuitar’s is unapologetically voiced for high-gain-loving metal players. But not exclusively so, as we’ll find out.

It’s important to stress this is a pedal amp - a multichannel head at your feet - as opposed to a multi-effects unit with amp and cab models like the Kemper Stage, Line 6 Helix series and Fractal’s forthcoming FM3. It’s focussed on providing four preamp voices; three of them overdrive channels. There’s also a clean channel designed with humbuckers in mind. There is cab modeling here too, though.

The Amp1 Iridium Edition uses loudspeaker models with impulse responses for recording direct, but they can be turned off if players prefer to use their own. The Amp1 offers an immediately clear setup to have in front of you - and that’s kind of refreshing in this era of do-it-all wunder-units with small screens and complex interfaces.

The Amp1 is designed to take on the amp role only and to work alongside your pedalboard and multi-effects. So how well does it shine in its field of expertise?

With a matte black aluminum casing, this has stealth looks and a sturdy feel that should confidently survive the bashes of life on your ‘board. The attractive blue and purple LED lighting on the logo and pedals also nods back to Blug’s H&K roots. On the subject of lighting, the Nanotube 100 valve also glows behind its window on the Amp1’s face.

But what part does it actually play? The Amp1 Iridium preamp is solid-state analogue. The Nanotube drives the 100-watt class D output stage/power amp. So it’s a combination of solid state and valve with a pinch of digital in the brew too; the onboard reverb is the only digital part of the signal here.

Plugging our SG Special into our cab, it’s a trip through gain city as you go up. It’s loud, too - not ‘loud for a small unit’; we mean serious headroom. But with the PowerSoak feature it also sounds great at 0.15 watts of power.

The channel names do a very good job of explaining their characters, but it’s not exclusively for metal palettes (though there are two other Amp1 models available to suite less gainy tastes).

The Vintage channel here works well with the bridge single-coil/ neck humbucker Tele we brought along for the ride; think hot-rod blues for Hendrix or even more raucous garage rock tones. Classic is great for moving from EVH hard rock to the old-school gain of Maiden and Priest.

The Iridium brings a smoother boutique warmth but it’s never woolly; it really shines for our neck humbuckers, offering clarity where some amps and modellers feel muddier. Many will jump straight to the Modern channel; and we can’t blame them. Think Metallica’s ‘Crunch Berries’ Boogie territory; ...And Justice For All-levels of chug moving to more sharp prog-metal tones.

The response and note articulation is immense, and the onboard noise gate keeps it all tamed. This really feels like a full-bore head because it’s designed to be one, just scaled into a floor unit. We can’t help thinking of our experiences with Victory’s preamp pedals; it’s hard to dial in a tone that isn’t impressive.

BluGuitar’s professional musician mind has really put thought into making the Amp1 comprehensive, because in addition to the superb channel tones, there’s two crucial features that make all the difference.

The onboard footswitchable room reverb is musical and never overpowering. The onboard boost acknowledges some of us just love to have a Tube Screamer to up the ante for rhythm and singing lead lines.

The Amp1 Iridium Edition absolutely delivers on its premise and it’s hard to fault for anyone looking for a high-gain, portable amp without compromise.

For more information, head to BluGuitar.