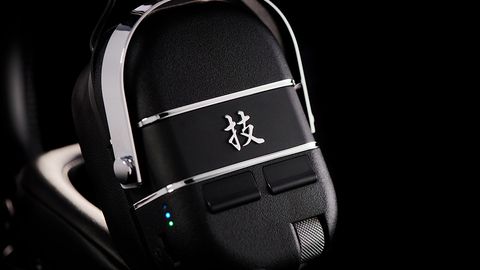 "Practice makes perfect," they say, and for guitarists, a practice routine can be a dull affair when you’re stuck in a room with just headphones and an amp. Wouldn’t it be far more exciting if you had something that allows you to take your practice and playing anywhere?

Well, following on the success of the Boss Katana-Air, a pioneering product that Boss touted as “the world’s first totally wireless guitar amplifier,” the company pushed the envelope even further by introducing the forward-thinking Boss Waza-Air, a personal wireless guitar headphones system that integrates spatial technology and a gyro sensor that tracks your head movement to deliver a virtual and 3D-like “amp-in-room” experience.

Add to that, premium Katana amp and effect tones, Bluetooth audio streaming and sound editing via your smartphone (from the free Boss Tone Studio app), and the Boss Waza-Air may be the ultimate all-in-one practice and play-anywhere solution.

The WL-T transmitter allows for totally wireless performance. You'll get around five hours of playing time from the fully charged headphones, and around 12 for the transmitter.

There are no cables to be found because Waza-Air pairs its headphones with a low-latency WL-T wireless transmitter for fully wireless connectivity. Both units have built-in rechargeable lithium-ion batteries with an auto standby/wake function to conserve battery life.

And it’s a long battery life too; the headphones last about five hours of play time, while the transmitter hangs around 12 hours.

The headphones feature large, custom-designed 50mm drivers for studio-quality sound, soft conforming earpads to ensure comfort and a wide headband for a secure fit, plus power and Bluetooth-enable switches, a chrome-knurled guitar volume wheel and two plastic buttons that access the six onboard preset memories and tuner, and which also can control playback when streaming from your mobile device.

Surround captures the immersive atmosphere of playing in a virtual recording studio, while Static activates the gyro sensor and places the amp and ambient room sound in front of you and pans it in relation to your head movements. Stage places the amp sound behind you, creating a virtual “live setting” that delivers life-like sound and feel.

Downloading the free Boss Tone Studio app (for iOS and Android mobile devices) offers extensive customization of the five unique amp voices, including a full-range voice for bass or acoustic/electric guitar, access to more than 50 effects, the ability to edit and organize preset patches, and download tones curated for Waza-Air.

Once they’re fully charged, simply inserting the WL-T transmitter into the Waza-Air’s 1/4-inch headphones jack instantly pairs both units (Note: You can’t simultaneously charge both by doing this) for total wireless play.

It’s quite liberating having no cables to get tangled up in, which means you have freedom to move about as you play while hearing your guitar in three novel environment settings. Surround mode is virtual-reality candy for your ears, but what’s wild is the panoramic effect triggered by your head turning in Static and Stage modes.

It’s an aural sensation that can best be described as surreal. Even cooler, using the Tone Studio app, you have 360-degree rotation control on where to place your guitar and audio positions.

The Katana-amp voicings are intrinsically Boss-sounding, meaning they have a digital sheen combined with desirable analog overtones that sound completely organic. It’s the most pleasing hi-gain and clean tones to my ears, with each sounding incredibly dimensional through Waza-Air’s high-fidelity headphones.

As always, Boss over delivers in their wide selection of delays, reverbs and modulations that produce each effect with vivid clarity.