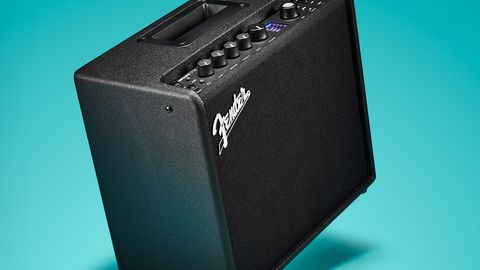 With its unfussy simplicity and interesting sounds, the Mustang LT25 is a modestly-priced digital combo that makes you want to play just that little bit longer.

From apps to computer software, mini headphone amps to rackmount modellers, there’s no shortage of products available for us to plug into in order to practice playing the guitar.

If anything, the amount of choice can be somewhat overwhelming, with interfaces replacing your amp, your amp doubling as an interface, all with pretty much everything you actually need under the hood.

Fender is no newcomer to the modeling amp game, its Mustang amps have always impressed us with the number of features, sound quality and ease of use. So what’s the LT25 all about, then? Well, it’s a modeling combo featuring an eight-inch speaker, 20 amp models, 25 effects, USB connectivity, and an auxiliary input.

In an era where seemingly everything connects to everything else over bluetooth, requires some sort of smartphone integration and will switch your lights off if you press the wrong button, you’ll forgive us for actually feeling quite refreshed as we connect our guitar with a jack cable and start trying out sounds.

That’s not to say the Mustang isn’t well-stocked - there are 30 on-board presets designed to get you playing and show off the variety of sounds within. Scrolling through each one is made easy by using the large encoder to the right of the screen.

If you want to tweak the preset by swapping amp models or effects, it’s as intuitive as pressing the encoder and scrolling through each category.

When you’re done customizing, you can save your sound or just jump presets to discard your changes. Operationally, it’s a joy in that we barely need to put our pick down - making our playing session uninterrupted.

That’s great, then. But it’s moot if the tonal weight isn’t there to back it up. When we think of Fender amps, we’re obviously transported to the super bright, clean spank of a Twin, or the smooth, mild breakup of a Champ being pushed into overdrive.

But the LT isn’t just about clean or pushed sounds. There are some meaty higher-gain emulations on offer too, and they’re equally as impressive at times as the more ‘Fender-y’ tones.

Effects vary from utilitarian compression and gates, through to some more exotic sounds such as an octaver, an auto-wah and some surprisingly high-quality delays and reverbs.

Call us luddites, but we think the Mustang LT is pitching itself perfectly. By Fender’s own description, it’s aimed at beginners and students, and while the feature set here isn’t crazy compared to some late-2019 offerings, what it does, it does very well.

We enjoyed the un-fussy simplicity and interesting sounds, and most importantly, it made us want to keep playing! This part of the market features some strong competition, but the ‘Stang has proved itself once more.

For more information, head to Fender.