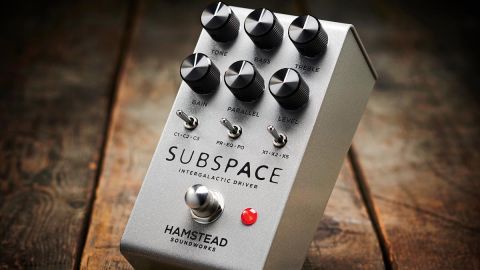 We described the Odyssey as versatile, but this takes things further, particularly with that Parallel knob expanding the possibilities. It’s a complete drive workhorse with now’t taken out.

Hamstead’s Odyssey is one of those supremely versatile drive pedals that can provide you with a whole range of tones from clean boost to fuzz.

The company has now followed that with a similar chameleon-like pedal that’s been optimised for low frequencies and expands on the Odyssey’s control surface with a sixth knob that allows a parallel blend of dry and effected tone.

Such a feature set seems aimed at bass players, but it has attributes that will endear it to guitar players who are looking to shape fulsome drive sounds, too.

A three-way clipping switch defines the basic character of the dirt here and works in conjunction with Gain and Tone (high-frequency) controls. There are also three switchable options for increasing amounts (up to five-fold) of input gain level.

While the USP of the Subspace is that it does not lose any low frequencies when engaged, you can roll off bottom-end if you wish; Treble and Bass EQ with 18dB of cut or boost can be placed either pre- or post- the drive circuit. There’s also a Clean Boost setting that bypasses the drive circuitry, so you’re just using the EQ, input gain level and volume knob.

That clean boost demonstrates the utter tonal transparency of the pedal with the bottom-end remaining completely unmolested, and there’s a shedload of boost available – transparent or tonally-targeted.

Moving on to the dirt sounds, the clipping options give you three different flavours as starting points with a massive range of gain delivering everything from early stage valve break-up to thick distortion and some fuzz-like variations.

Constructive use of the Treble and Bass knobs in the pre setting can shape the midrange to focus your dirt frequencies, and that parallel facility completely opens up your range of options.

Basically a volume knob for your unadulterated input signal, it can be juxtaposed with the drive and EQ circuit’s volume knob to allow the creation of many sonic blends, such as adding some extra string clarity to a driven sound or tacking on just a touch of saturation to a clean sound.

We described the Odyssey as versatile, but this takes things further, particularly with that Parallel knob expanding the possibilities. It’s a complete drive workhorse with now’t taken out.

Slightly more affordable and the original platform on which the Subspace builds its own take on the genre, the Odyssey is Hamstead’s first all-analogue attempt to push the boundaries of what a drive pedal can be.

Two independent JFET/IC analogue channels comprise a total of six unique boost, drive or fuzz circuits that can be combined for a comprehensive collection of dirt tones. 33 routings are possible, and it supports presets.

Putting the essence of its original RevivalDRIVE into a more practical format for pedalboard use, Origin Effects’ Compact pedal offers a versatile range of authentic-sounding vintage amp tones and overdrive.