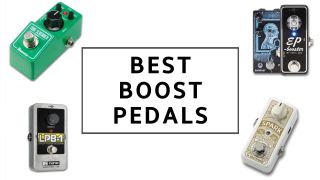 The best boost pedals for guitarists can make a surprising difference to your overall electric guitar tone, yet they can be surprisingly simple in terms of design and use. Boost pedals are essentially an amplification stage in a box. They can be used to add more volume to your guitar signal for leads, or to smash your tube amp into searing saturation for heavy rhythm sections, making them a worthy addition to your pedalboard.

A one-trick pony, perhaps, but the best boost pedals have been at the heart of some of the most memorable guitar tones of the last 60 years. Boost pedals are primarily about making your guitar louder, yes, but historically they're also about pushing tube amplifiers into greater saturation, or 'stacking' with other drive pedals for effect. They’re normally less expensive than the best distortion pedals and the best overdrive pedals too.

Before we unveil our list of the best boost pedals to buy now, allow us to introduce you to our favorite boost overall…

Amazon Prime Day is just around the corner. If you're looking for a new boost pedal then it could be worth waiting until the Prime Day guitar deals start landing.

If you want an all-singing, all-dancing option that can replace not only a boost, but also an EQ, a preamp and an overdrive, then the Chase Audio Bliss Condor is the best boost pedal for you… provided your pockets are deep enough. Its boost section is fully-featured and has a wide range of gain as well as full MIDI control.

If you don't need the EQ or MIDI, the simpler two-band EQ on the Smallsound/Bigsound Mini might be just your ideal pick. It's an incredibly characterful boost and a versatile drive pedal when you increase the gain.

For a more straightforward boost, the Walrus Audio Emissary Parallel boost pedal is the best of the bunch – bright, crunchy and inspiring with its JFET-driven tone. However, if budget is an issue, we’d recommend the TC Electronic Spark as the more affordable best boost pedal. Trust us, it can kick a tube amp just as hard as any of its pricier competitors.

Choosing the best boost pedal for you

The most basic boost pedal is just an amplifier stage, so the only variable there would be how much amplification (or gain) it delivers. Most of the time this will be listed as a decibel or dB value, and most dedicated boosts offer around 20dB.

The second thing you'll see on many of the best boost pedals is some kind of EQ. On some it may be a simple treble cut, while others will go as far as a two or even three-band EQ. Even without an EQ control, a boost will change the EQ profile of your guitar, and the extra gain will add compression. It's mainly this that makes boosted signals sound 'punchier'.

This probably is starting to sound familiar – it's basically an overdrive, right? Well, yes and no. The only thing that an overdrive is likely to have over a boost pedal is clipping, usually in the feedback path for the amplifier stage. This means that if you turn down the clipping, or drive knob, and turn up the level on many overdrive pedals, they will serve as a boost. In fact, that's exactly what many players use the Timmy and Tubescreamer for.

All of this adds up to a pretty simple set of options when finding the best boost pedal option for you, and which will largely depend on your amplifier. With a decent tube amp, you're likely to EQ at the amp, and prefer the amp gain, meaning that a more simple boost with lots of gain on tap would do the job. On the other hand, with a solid-state amp, you're likely to want something a little bit hairier and more characterful, perhaps even with some clipping. Just don't call it an overdrive, ok?

Both of these circuits have independent controls, and the mids circuit has a switchable EQ for where its boost 'bump' is. You can switch between 800Hz and 1kHz - which of course, is where the mid hump of a Tubescreamer is.

We're suckers for a JFET boost or drive, and the ability to mix in the sparkling JFET circuit to add more top-end content really is a killer feature.

The main strength of the Spark Mini is also probably its main drawback - it's simple to a fault. One knob, 20dB of gain, and that's it.

In terms of voicing, it's relatively open, getting more compressed as you raise the gain. Without tonnes of character of its own, it works best smashing a tube amp rather than for coloring a guitar signal, to our taste, but we do know players that use it as an 'always on' pedal to do just that.

For those in the know, the Smallsound/Bigsound Mini has been a sleeper hit for years, with most serious pedal freaks who are into the 'amp-like' sound of JFET drives having to try one at some point.

As they're all made by hand by one person, they can sometimes be hard to get a hold of, but like the original Paul Cochrane Timmy, they're well worth the wait.

With the gain pulled back, it's a bright JFET treble booster, enough to smash an amp into saturation or make your guitar 'pop' for a lead part, and bringing up the gain will take it all the way to thick, grungy rhythm tones.

Given everything this pedal does, it's kind of a steal for a handmade, boutique drive with this reputation.

The best boost pedal if you want… everything

The Condor does so much, it's probably quicker to list what it doesn't do. Well, not quite, but suffice it to say that it's a powerful tone-shaping tool and preamp that also packs a punch in the boost department.

Like all Chase Bliss pedals, it's MIDI-controllable and has a plethora of additional options in the form of DIP switches on the top of the enclosure.

If all those drive and EQ options weren't enough, its ramp functionality also means that it can be used as a tremolo as well. Too clever by half.

This classic boost pedal has another trick up its sleeve

For not much more money than a single-knob boost, you can get this, a full-fat overdrive, and the modern, mini incarnation of the venerable Ibanez Tubescreamer.

It stacks well, and its EQ profile lends it to interesting pairings - for example, with a Big Muff, which as a notch around the same frequency range that the Tubescreamer has a boost. As a result, a common trick is to use the Big Muff as the rhythm sound, and then stack it with a Tubescreamer for leads, as the scooped mids suddenly jump out of the mix.

It's ironic that perhaps the most famous boost of all time is technically an overdrive, but no matter. Turn the drive down, turn the level up, and see what all the fuss is about.

The best boost pedal to thicken up a signal

£35.99
View at Amazon
Full of character
Affordable
Not the newest design

First debuted in 1968, the LPB-1 has stuck around for this long for two reasons: it's affordable, and it gets the job done. It's relatively characterful and compressed, which is a good thing if you're looking to thicken up a signal before it hits a tube amp.

The best boost pedal for purists

The Xotic EP-3 models itself on the preamp section of the Echoplex EP-3, a classic tape echo. The story goes that many guitarists liked the colouration that the unit gave to their tone that they left Echoplexes in their signal chains even after the tape echo section broke or wore out.

Whatever the truth of that, it's a fantastic circuit, and a mainstay of boutique builders and the DIY scene for decades now.

Dunlop also offers a take on this circuit, but it only has 11dB on tap. We'd opt for the pedal with the extra 9dB, but the option is there, should you want a pedal with a single knob that goes to eleven on your board.

Another drive in disguise

Just as the Tubescreamer is an excellent boost, it should come as no surprise that a brilliant pedal like the Timmy that's in the Tubescreamer family tree should also prove equally formidable as a boost.

The big difference between the two is in voicing - the Timmy has a flatter EQ profile, without the Tubescreamer's trademark 1kHz mid-hump, and a bit less compression, which is maybe more noticeable on cleaner settings.

The best boost pedal if you want a no nonsense option

We've always been suckers for the sound of an MXR Micro Amp stacked into another drive pedal, or used to slam a tube amp.

That said, as great as this sounds coaxing extra saturation from a Big Muff, or getting our leads to jump out in a band mix, we have to admit that it's no longer the best value for money given the other great and affordable options on the market.