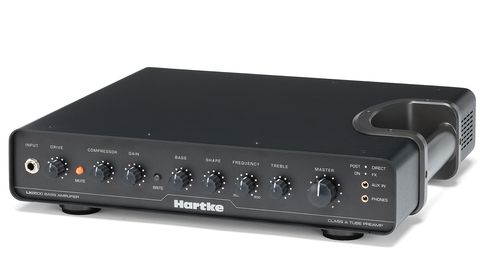 A versatile amp that should appeal to a wide range of players, the Hartke LX8500 is a stage-ready amp with lots of power and the means to control it, with a grown-up EQ, musical drive and an impressive onboard compressor.

With an artist roster that boasts heavyweights such as Victor Wooten, Nate Watts, David Ellefson, James Genus and Billy Sheehan, Hartke remain one of the key players in the world of bass amps.

After venturing into the lightweight amp market just a few years back, the company are now adding to their line-up with the release of the new LX series.

These are Class-D amplifiers with Class A tube preamp, available in both 500 and 800-watt continuous power configurations. We were sent the LX8500 to put through its paces.

The LX8500 has a sleek, modern look comprised of a robust, curved aluminium chassis with a conveniently recessed carrying handle. It’s bigger than I was expecting, and certainly won’t fit into the front pocket of a gig bag, although at just 8.5lbs, it’s certainly no hardship to carry.

The controls feel sturdy in use and are circled by illuminated dots. The knob pointer line also illuminates, to make its position noticeable.

The front panel itself is uncluttered and simple to navigate. From left to right the input is followed by Drive, Mute, Compressor and Gain controls. The EQ stage has four controls: Bass, Shape, Frequency and Treble, with an additional Brite switch before the EQ which activates a pre-set EQ curve that greatly emphasises the high frequencies.

In use, the basic tone is thick and satisfying with plenty of low-end oomph. The Drive control offers overdriven tones that range from subtle to brain-melting: this is useful both for adding subtle grit to some recording that I did with the amp, as well as rocking out with a much dirtier tone than I typically use.

The driven tone has a pleasing warmth to it thanks to the 12AX7 tube-powered preamp, making it a welcome addition to the amp. The compressor functions as expected, with the illuminated dots changing to yellow to indicate the point at which it kicks in.

A similar function is present with the Gain control, with a multipoint clip indicator LED showing red when the signal is overloaded.

The EQ stage on the LX8500 is a little unusual: this is a tone stack EQ which operates in a different way to traditional boost/cut controls. With no ‘flat’ setting, when the controls are set to the 12 o’clock position the response is set to a pre-set EQ curve that has been tailored to the bass guitar.

The Frequency control shifts the operating point for all three EQ knobs, and as the Shape control is rotated clockwise, the depth of the notch increases; counter-clockwise, it increases the notch depth.

This is a versatile EQ, but it’s one that requires experimentation with each individual instrument in order to tweak the tone to the user’s satisfaction. Switching in the Brite function adds a significant high frequency bump to the basic tone, a feature that would work well for slap fills or for solo playing.

The rest of the front panel is occupied by a master volume control, aux input and a headphone output socket. When using headphones, the speaker is disconnected, making the amp useful for home practising as well as live work.

The rear of the amp features the usual connectivity: tuner out, Effects send and return, DI with pre/post switch and two TRS footswitch inputs which allow for the Drive, Effects Loop, Frequency and Brite parameters to be operated via footswitch.

This latter function is useful as it means that a basic tone can be established, with the option of then kicking in a brightness boost via a footswitch for important fills.

Although I only used the LX8500 at home and for some recording, it’s clear that this amplifier was built to handle much more. Outputting 800 watts of continuous power, this amplifier is well suited to... Well, most bass players really.

It’s great for home practising and recording, and perfect for the majority of gigging scenarios. The overall tone is rich and warm and there’s enough flexibility on offer to cater for most needs. At this price point you’re getting a lot of power for your money – and for that reason alone, the LX8500 is worthy of your consideration.

Power aside, there is much to like here: a versatile EQ, added compressor and drive functionality, all housed in a versatile and portable package. Hartke could be onto a real winner here.