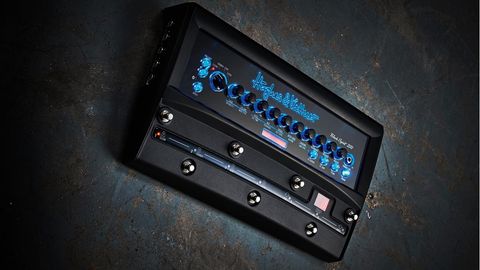 For working players who are looking for a credible alternative to valves, Hughes & Kettner’s Black Spirit 200 Floor is a pretty compelling choice - what’s not to like?

Hughes & Kettner’s hugely successful TubeMeister range was topped a couple of years ago with the GrandMeister Deluxe 40 head, which added full digital control together with built-in effects and more.

At the time, we wondered if there was anywhere left to go, but we weren’t kept waiting for long before Hughes & Kettner introduced the Black Spirit 200 head, essentially a rework of the valve-powered GrandMeister Deluxe on a solid-state platform.

Now Hughes & Kettner has added a new floor version that combines the head with an integrated FSM-432 MIDI controller, and called it, unsurprisingly, the Black Spirit 200 Floor.

Because of its similarity to other modelers and multi-effects floor boards, it’s important to point out the Black Spirit 200 Floor is neither of these things. It has a digitally controlled analogue solid-state preamp that Hughes & Kettner calls the Bionic Spirit Tone Generator, featuring four channels - Clean, Crunch, Lead and Ultra.

This preamp is teamed with high-quality onboard digital effects and a Class D output stage producing a whopping 200 watts into a pair of speaker outlets, with switchable attenuation down to 20 and two watts.

Bluetooth lets you stream audio to the Black Spirit and control everything remotely from a mobile app, with 128 slots to save things to.

Foot control comes from an integrated version of H&K’s FSM-432 MkIII MIDI board, which has seven button switches and operates in three different modes: Preset mode lets you access all 128 patches in 32 banks of four, ideal for Top 40 players who can put a song in each bank; Stompbox mode uses each button to access channels, boost and effects; and a new Direct 7 mode lets you assign a favorite patch to each button for instant recall.

The black painted die-cast aluminum housing feels substantially tough; it’s very portable but heavy enough to stay where it’s put. Hughes & Kettner’s trademark blue backlighting surrounds all the controls, which are much easier to use than they may appear at first glance.

Pressing the FX Access button puts the amp controls into effects editing mode, with a choice of chorus, flanger, phaser or tremolo combined with delay and reverb, while the sag control changes to access the Red Box’s different cabinet emulations.

Other features include a cabinet EQ switch that provides a flat sound for regular guitar cabs, or Red Box emulation for passive full-range speakers. There's also a headphones/line out, full MIDI and a monitor/aux input with its own level control.

The Bluetooth remote app essentially mirrors the real controls and doesn’t unlock any hidden functions. It currently works on iPads and Android tablets but not iPhones, which is something we think H&K really needs to address, especially as iOS is being split into two versions. Another annoyance is the lack of a DC outlet to power stompboxes.

You’ll find one on the standard FSM-432 foot controller, but here, with three loops conveniently on the floor right where your pedals would be, there’s no power for them.

While the Black Spirit 200 Floor isn’t a modeling amplifier, its core tones are deep and wide enough to cover practically every musical genre, from country and jazz to thrash metal. The Clean channel’s EQ can make it fat and tweedy, with a touch of slapback delay for great rockabilly stuff, or you can scoop out some of the mids for a more contemporary shimmer topped off with a dash of chorus.

The Crunch channel ups the gain for great classic rock and blues styles, with the Lead channel adding more gain and attack, while the Ultra channel is where you’ll find all the compressed, liquid sustain tones favored by many modern rock players.

The quality of the overdrives is superb. Hughes & Kettner has always been among the best when it comes to solid-state amps, going right back to the Attax series from two decades ago. Since then things have moved on in leaps and bounds. The crucial lower gain nearly clean tones come alive when tweaked with the sag control, adding tactile and responsive dynamics that flatter each guitar’s character.

The Black Spirit’s onboard effects are very usable. It’s the same chorus/flange/ phaser/tremolo combination you’ll find on most of the competition - so no real surprises. Nevertheless, they’re decent quality and, of course, there are three separately programmable loops for your favorite stompboxes as well.

The Red Box offers eight different cab simulations with a proper balanced output, adding great flexibility for connecting to live or recording consoles. Now in its fifth generation, the standalone Red Box is a de facto standard for direct recording and many working players have one in their gigbag.

Adding this feature to the Black Spirit 200 greatly increases its usefulness for stage and studio, saving setup time and improving separation.

Valves or tubes are used in most classic guitar amps from the 1950s to the present day, so they’re usually behind the great tones that we’ve come to love. However, current mass-produced valves aren’t as reliable or consistent as their 50s counterparts, making it increasingly difficult and expensive to keep a valve amp running in peak condition.

Digital modeling continues to advance along its own path. Meanwhile, we think the Black Spirit 200 range has truly raised the bar for solid-state tone, combining fat analogue sounds with modern Class D output stages to achieve portable power that would have been unthinkable just a few years ago.

The new Floor version here adds most of the functionality of the head version, plus the FSM-432 MIDI controller, with a few cool extras at a modest saving, making it great value for money.

Back in the 1970s, the standard rig for many pro touring guitarists would have been a 100-watt British head and 4x12, plus a 100-watt American or Japanese 2x12 combo for clean sounds, together with flight cases, cables and pedals. Hughes & Kettner’s Black Spirit 200 Floor condenses all of that and more into a chocolate box-sized package you can lift with one finger, not to mention the sort of reliability and night-after-night consistency that most valve competitors can’t match.

For working players who are looking for a credible alternative to valves, Hughes & Kettner’s Black Spirit 200 Floor is a pretty compelling choice - what’s not to like?