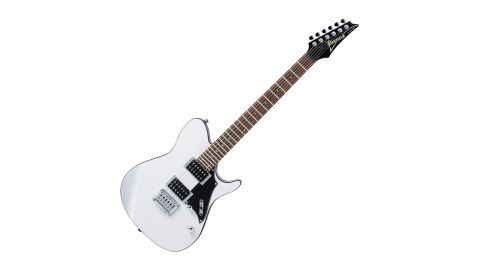 It is always a pleasure to encounter a guitar that so confidently navigates a road less traveled, as this one does in being a genuinely shred-ready utility instrument.

One company more than any other has demonstrated the importance of premium R&D trickling down to inform the mid-range and eventually even the entry level. Considering that much of the cutting edge development in which Ibanez indulges is focused on pushing physical dimensions to the extreme, making the company the number one choice of 21st century shredders, rather than exotic materials or esoteric construction techniques, many of the premium features developed by the Ibanez boffins are easily transferred to lesser models when the time is right.

So it is with the Wizard neck. The ultra slim profile was the result of engineering undertaken during the mid-‘80s and focused on developing the Saber model, which would become the basis for the signature model of Aussie shredder Frank Gambale. If the Macbook Air was an ‘80s shred guitar, it would be the Ibanez Saber, which had a contoured body that tapered to an exceedingly thin edge. The Saber’s neck was the original Wizard profile with a 430mm radius and a thickness of only 17mm at the first fret.

These days, the Wizard III is the standard version of the profile and it features on many Ibanez models. We are taking a look at the FR320, which retails for $699, yet sports the same cutting edge neck profile featured on Ibanez guitars retailing for several times as much.

With a 400 mm radius and a depth of 19mm at the first fret, the Wizard III profile is reined-in a little compared to the late-‘80s excess of the original design, however it’s still an extraordinarily fast profile. The dimensions are the same as the Wizard II featured, however the contemporary version is a rounder shape, with a less pronounced shoulder. While it’s unquestionably a speed demon, the profile is very stable, allowing you to settle in for rock solid rhythm parts between all the no-time-for-speed-limits soloing.

In fact, the FR320 is such a sweet and versatile instrument, it would do it a disservice to consider it only in terms of shredding. In fact, the FR320 would be more than capable of covering bases from funk to punk to blues and even country, though you would want to have a hot twang to your sound considering the FR320 is equipped with a pair of humbuckers.

Controls are basic, just a three way selector plus master volume and tone. Surprisingly for a guitar retailing for as little as this one does, the FR320 responds to variations in your playing in a sympathetic and musical manner, so that even with a very basic control configuration, it has a versatility that would be impressive even in a much more expensive guitar. Indeed, this fact alone nominates the FR320 as a guitar that is more likely to appeal to a confident and experienced player than some poseur propped up by a pedalboard, and as such, it represents terrific value.

Crucial to achieving this manual variation is the fixed bridge, which as well as enhancing sustain, provides a solid platform for palm muting. This is one of the elements that contribute to making the FR320 such an amazing utility instrument, as the Wizard III neck encourages all sorts of extreme shredding, while the fixed bridge allows you to use your full range of rhythm techniques. While many disappointing utility instruments aim for a compromised position that is perfect for neither solo nor comping, the FR320 genuinely offers the best of both worlds. If your lead style does not rely on tremolo, this may well be the perfect configuration for a utility instrument.

Ibanez has some of the best quality control in the business, even as their manufacturing interests have expanded throughout Asia. Built in Indonesia, the FR320 is everything you would expect from a mid-range Ibanez model, regardless of country of origin. It is always a pleasure to encounter a guitar that so confidently navigates a road less traveled, as this one does in being a genuinely shred-ready utility instrument, but when such a guitar retails for $699, well that is something else again. I’m not a fan of the pickguard shape, but otherwise you can most definitely count me in (one, two, three, four)…