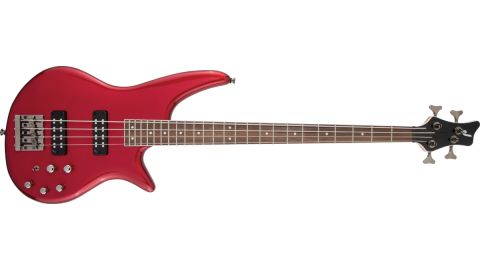 An excellent, affordable bass that holds its head high.

The past few years have seen Fender making significant strides with their Jackson bass range, and that expansion continues with the addition of three new models to the Spectra series - the JS2, JS3 and the five-string JS3V.

Unveiled in January 2019 at Winter NAMM, these instruments aim to deliver above-average playing comfort and unique appointments at a competitive price point. We put a JS3 through the paces to see how it measures up.

Straight off the bat, the size of the contoured upper horn commands attention. Beyond its eye-catching aesthetic prominence, the generous contours distribute the weight evenly from stem to stern. Played seated, the JS3 sits snugly on our lap regardless of posture, while hanging from a strap, the body and headstock balance extremely well.

The solid poplar body is one of many economy-focused design choices, and it proves a keen decision: as one of the softer hardwoods, poplar’s tight grain delivers an extra degree of resonance and a reliably meaty tone, without feeling as if you’re wearing an anvil over your shoulder.

The graphite-reinforced bolt-on maple neck comes with a robust one-piece angled scarf joint that pulls the strings tightly downwards from the nut to the tuning post, resulting in an impressive amount of sustain.

We often hear gearheads bemoaning the often-unwanted bright edge of a maple neck, but we don’t notice such issues with the JS3; on the contrary, the tonal palette is smooth and rich, with a gorgeously creamy low end and a groovy twang in the treble zone.

Running through some blues with the bass tweaked high unleashes a low and menacing growl that will curl a smile on the corner of the meanest bass face.

With a total length of 34” (35” on the JS3V), the speedy neck contour opens the JS3 to fast playing, with a 12”-16” compound radius laurel fingerboard that boasts wide spacing between frets, which we appreciate immensely.

With an unambiguous focus on economy, we’re hard-pressed to find any pesky design flaws or structural issues; after logging long hours over the course of several weeks, the JS3 proves both sturdy and reliable.

A pair of passive Jackson medium-output humbucking pickups are housed in the glossy Metallic Red body and, in keeping with Jackson tradition, the JS3 shuns single volume and tone controls. Instead, it features an array of knobs that allow the player an immense amount of flexibility in tweaking the tone without having to adjust the amp or pedalboard.

There’s a two-way toggle switch for pickup coil splitting and a three-band EQ for bass, midrange and treble controls. A hi-mass bridge is strung through the metal plate on the back of the bass.

Notably, the blend control and volume knobs come with a push/pull selector that allows you to either bypass or engage the active circuit for the three-band EQ. No more anxiety over a battery dying in the middle of a gig; a quick pull on the volume knob will bypass the active circuit, flipping over to passive mode and allowing you to quickly regain sound without battery power.

Running through a set of classic rock bangers, we set the EQ controls completely flat, and the sound thunders with dark potency, although the mids cut rather prominently through the mix, so much so that we had to pull it back a bit to even out the tone.

This is where the arsenal of knobs proves particularly useful: our desired tone is quickly achieved with a small adjustment that barely interrupts our playing. The low end delivers a concussive wallop that requires very little in the way of tweaking.

On the opposite end of the spectrum however, the high notes peaked a bit more sharply than expected, lacking some of the range and subtlety we find in higher-end instruments.

Nonetheless, given the available controls, this hardly rises above a small quibble. Whether jamming on blues, R&B or country, the bass delivered on its promise of a fast action; we effortlessly moved up and down the neck, never dragging against the grain. Regardless of how hard we pounded the strings, the JS3 remained in tune in both standard and drop-tunings.

Visually, the JS3 is a tribute to elegant simplicity. It is available in Gloss Black, Metallic Red and Silverburst finishes, with black nickel hardware and a Jackson 2x2 headstock.

Whether on stage or on the wall of your jam room, the JS Spectra makes an impressive addition to any collection, and setting aside affordability, it checks all of the boxes: a snug, ergonomically-friendly design, a wide range of controls and a luxurious tonal palette that lends itself to virtually any playing style.

Considering its budget-friendly price tag, the JS Spectra series emerges as one of the most affordable and versatile offerings of the year.