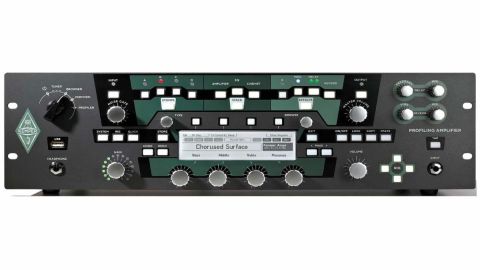 For studio or live work, the Kemper offers a virtually unlimited palette of living, breathing amp and effect replicas.

Every now and then, a product comes along that is so deep and multi-faceted, it makes my job as a reviewer extremely challenging. The Kemper Profiler is one such product.

Already spoken of in reverent, hushed tones by a cadre of top studio-ace guitarists, Kemper has recently added a large library of bass-specific profiles that turn this piece of hardware into a plug-and-play solution for sessionistas, Rock Gods, or anyone who wants to have the entire world of amplification and effects conveniently at their disposal.

You could consider the Kemper Profiler a digital modeling amp, but the degree of control is staggering, and the factory profiles feel more three-dimensional than other modeling units I’ve tried.

The Kemper gives you a comprehensive set of parameters to edit each individual profile, and there is a wide range of control over the functions of the device itself. Clean and distorted input sensitivities are incrementally adjustable and assignable to any of the inputs; outputs are also assignable, with individual volume and EQ, and available simultaneously for multi-tracking.

It can be remotely operated via MIDI, standard footswitch, or—soon— with Kemper’s own floor controller, to access your setups in performance mode. But the groundbreaking feature is the ability to create, edit, and store your own amp profiles using Kemper’s unique profiling technology.

To create your own profile, plug into the Kemper’s front input, route the Direct Out to the input of the reference amp you want to profile (with or without a stompbox in between), then set the desired tone.

You can connect the amp DI to the Kemper’s return input to profile just the head, or set up a mic to capture the sound of your cab. Naturally, with the latter approach, the results are subject to your miking capabilities, but there are many ways to edit and refine a profile after it’s saved. Once your tone is set, there is no playing during the profiling process.

A series of tones and signals are sent through the reference amp, informing the Profiler about the frequency response, impedance curve, and dynamic distortion curve. The Kemper reads this information at the return input and formulates a mathematical fingerprint of the reference amp’s sonic profile, which can be stored as a “rig” in internal memory. Once a rig is saved, it can be combined with any stomp or effect combination, as well as with other profiles to create unique hybrid stacks.

Tubey, or not tubey?

Originally developed for guitarists, a good part of the Profiler’s technology is geared toward capturing and reproducing tube amps in various degrees of distress.

But the solid-state and hybrid worlds are equally represented with amps and preamp profiles of several boutique companies from the U.S., England, Italy, Denmark, and Germany: Aguilar, Ashdown, Avalon, Gallien-Krueger, Great River, Hughes & Kettner, Markbass, SansAmp, TC Electronic, TecAmp, and Universal Audio. Many of the full amp profiles are captured with different cabs and microphones for variation.

In addition to this full complement of rigs, there are eight stompbox types: wah, distortion, EQ, compressor/gate, chorus, phaser/flanger, pitch shifter, and delay/reverb—each containing several different profiles, all with intelligent editing capabilities. But in case you need more, there is a full postrig section where modulation, delay, and reverb can be added, as well as an “X” bank that can be used with a stomp-box profile.

The full-featured effects section is well rounded, but there are a few that work particularly well with bass. The Analog Octaver tracks like a bloodhound all the way down to the lowest reaches of the neck, with a mixable blend of one or two octaves below the original note. With the MIX and LOW CUT controls, you can dial in a perfectly stable octave effect that speaks well in any range.

The pitchbased effects are standouts, benefiting greatly from the Kemper’s processing power. The harmonic, chromatic, and pedal pitch effects have pure tuning, smooth chords, and formant-shift parameters that help this sometimes-troublesome effect work like a charm on bass.

All of the chorus effects have a programmable crossover point to let you set how much low end remains clean, and if you’re into fuzz boxes and delays, they are well represented, too.

The Class-D-powered Kemper Profiler comes in a desktop or rackmountable configuration, with a claimed 300 watts at 16Ω or 600 watts at 8Ω. The reference manual (a must read) says it will work with a 4Ω speaker load—with the caveat: “There is very unlikely to be a problem unless you play at painfully high loudness levels.”

A profile that includes cabinet information may not sound ideal through your cab, particularly if it has its own distinct tone color or lacks a tweeter. Selecting monitor cab off from the output menu activates the Kemper’s “CabDriver” algorithm, which retains some characteristics of the profiled cab, but avoids over-coloration. The profiled cab sound is still routed to the other outputs for mixing and recording.

The front-panel cabinet button (in the stack section) accesses high and low shift, character, and volume controls to fine tune the cabinet profile, and turning it off removes all the cabinet information from the profile.

For live work, the Kemper can operate in Browser or Perform mode. Browser mode accepts MIDI program-change commands to let you select from 128 rigs. In Perform mode, you have up to 125 “performances,” each with five slots, for a total of 625 potential setups. These slots can be used for different rigs, or the same rig with different effect combinations.

If your gig requires multiple sonic changes or effect combinations within the course of a song or throughout the set, the Profiler can make your life much simpler. It’s easy to see how these capabilities might have attracted notable Kemper users Tony Levin and Pino Palladino.

The infrastructure is in place to access many of the Profiler’s functions and organize the content for live work, and Kemper’s free-download librarian software makes this a more pleasant task. You could easily set-and-forget a favorite amp profile and rock on, but a floorboard with an expression pedal would be an ideal way to harness the Kemper’s considerable performance power. The Kemper ably powered my 8Ω Greenboy 112 to gig levels, and with front-panel soft knobs providing four bands of EQ, I could make on-the-fly adjustments just like on a regular amplifier.

Space is the place

With so many choices at your fingertips, going into a recording session with the Kemper would be equivalent to bringing along a semi truck full of gear, and its lifelike response particularly shines when heard through good studio monitors or headphones.

The Space effect from the output menu recreates the natural reflections of a small, neutral room, and greatly enhances the vibe “in the cans,” but it can also be added as an effect to any output. There are several edit parameters that calibrate the various outputs for specific applications, and the Profiler has everything you need in the box for re-amping.

I browsed through the offerings from the bass library, and picked one of the classic American hot tube models—it not only sounded dead on, it reacted to gain very much like the real thing. Monitoring through headphones, I could very easily imagine a smoldering SVT in an isolation booth down the hall. The clean sounds also excel, with several models of high-end studio preamps profiled without cabs.

Finally, I had to try profiling something of my own, and it was easy. In Profiler mode, the onscreen menus took me through the process very clearly. I dimed the preamp on my Genz Benz Shuttlemax 9.2 for all the grit it could muster, took out the DI, adjusted the return level, and pushed go.

The sound you hear through a cab during this process is a little disturbing, but that’s how the Kemper reads the overall response of the system. I wound up with something pretty close, but the Refine Profile function (which involves playing your bass through the setup while the Profiler listens) made a significant improvement. In the end, the profile captured the character of the Genz accurately, and added tons more headroom.

In spite of the many hours I have spent in this vast digital playground, there is much more to be discovered inside the Kemper Profiler. But what I have found is pretty freaking amazing.

The quality of the sounds, its pervasive flexibility, and the endless possibilities of building your own profile libraries make the Kemper a powerful tool for stage or studio. It requires a time commitment to learn the ins and outs, but between the Basics and Profiling Guide and the online reference manual, the information is available—you just have to read it.

New profiles are made available free on Kemper’s website, and the growing community of users have started contributing their own to the pool. With some mic technique and common sense, the Kemper Profiler could become the last bass amp (or stomp box) you’ll ever need, but it’s also a great way to capture any tone you can dial up on your own rig for portability, and instantly recall.