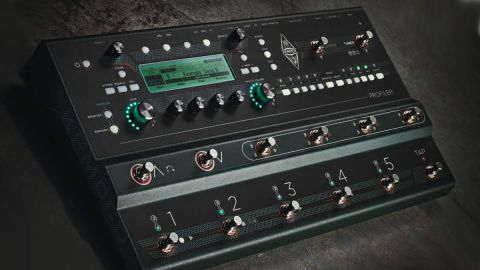 A pro-quality piece of kit that will reward those looking to embrace digital with a set of features, tones, resources and support with profound creative potential.

The arrival of Kemper’s Profiler digital head in 2011 was a game-changer for many guitarists, allowing them to digitally recreate the sounds of their own guitar amps, as well as download amp profiles from other users via Kemper’s online portal.

The Profiler Stage is housed in a tough steel case that’s heavy enough to stay put but still very portable. Newcomers to Kemper’s styling and operating system may find the controls somewhat daunting, with dozens of switches, knobs and multi-colored LEDs threatening to push even mild technophobes into sensory overload. However, everything has a purpose and the layout is quite logical when you get used to it.

The all-important display screen is relatively small compared with other similar products and the information isn’t so easy to read from a distance, although the contrast is good. The display backlighting changes color in some modes as a visual assist and all the footswitch labels are backlit, which is handy in low-light situations as well as looking very cool.

The Profiler Stage organizes amps, effects and speaker cabinet simulations into Rigs, which are stored in 125 banks of five, with a Browse mode and a separate Performance mode, which is useful for storing and shuffling setlists.

Two footswitch buttons step up and down through the banks, while five more directly access each Rig. Four more footswitch buttons can be assigned to toggle effects or groups of effects in each Rig, with two more buttons to the right of the display controlling the Profiler Stage’s looper and tuner functions and another for tap tempo.

Most of these buttons have at least one secondary function: for example, the Rig select buttons also operate the looper. In loop mode, the button number backlights dim and the looper control symbols become brighter – just one example of the thought that’s gone into making a relatively complex interface as easy as possible to navigate.

The unit’s signal chain is represented by a series of 12 illuminated push-buttons to the right of the display, featuring an input section followed by four effects choices in front of the virtual amp and four more effects after the virtual speaker cabinets, ending with an output section.

Button switches over the display handle various parameter select and editing functions, while under the display you’ll see that there are some more familiar-looking knobs for gain and master volume, with smaller assignable ones in between handling bass, mid, treble and presence as well as other parameters.

The mono LCD display is somewhat small and difficult to read from a distance, but it has all the info you need to know what the Profiler Stage is doing.

Other connections include S/PDIF digital in and out, no less than four expression pedal jacks, MIDI in and out, USB and headphones. Overall, the Profiler Stage is ready for life on the road, with robust construction, classy looks and impeccable styling.

The Profiler Stage’s software takes around 20 seconds to load, after which the lights and display screen come to life. Straight out of the box, this isn’t really a ‘plug in and go’ preamp. A read of the quick-start manual is recommended, as the main manual covers every feature and runs to 300 pages!

Even then, a supplementary manual covers MIDI programming; the Profiler easily exceeds the 128-parameter limit of normal MIDI, with more than 400 addressable functions available through NRPN (Non-Registered Parameter Numbers).

Kemper’s latest OS7 software has really come of age, offering an impressive array of onboard effects including wahs, distortions, delays, choruses and modulations, with all kinds of tempting extras lurking in the menus. It’s complemented by Kemper’s Rig Manager app that syncs online Rig Exchange and local patches, as well as managing firmware updates, which are reassuringly easy to apply.

Currently Rig Manager is only available for Windows and Mac desktops, with connection to the Profiler solely via USB. There’s no mobile or wireless option. Kemper’s main claim to fame is, of course, profiling: the ability to create a faithful replica of any guitar amp’s tone from a recorded sample.

On the Stage, the Profiling Assistant opens when you press down the Browser and Perform buttons simultaneously, after which you’re taken through the process. As you might expect, the quality of the resulting profile is very dependent on how well your sample is recorded.

Browsing through the 16,000 or so online rigs available through Rig Manager and the 280-odd that come pre-loaded, it’s quite easy to pick out those that have been recorded professionally from those that haven’t. With the best profiles, it’s possible to strip away the effects and hear an impressive recreation of an original amp, while others are quite heavily dependent on effects, with distortions and reverbs making many rigs sound too similar.

Ironically, quite a few of the online rigs are profiles of valve amp facsimiles made on other digital modelling products and software plug-ins, making one wonder how deep the rabbit hole can go.

One of the Stage’s strongest creative features is its ability to simultaneously change more than one parameter, something Kemper calls “morphing”: for example, sweeping from a high-gain lead sound with a longish hall reverb, delay and pitch shift to a clean rhythm sound with rotary speaker and a tight room reverb.

Your imagination is the only limit to what you can create, and the vast editing scope makes the Kemper a tweaker’s paradise. The quality from the balanced outputs is very good. There are ground lift switches for all the outputs in software, but we think Kemper should have used mini toggles on the XLR’s at least for speedy access.

Some may quibble about the lack of a built-in expression pedal. However, pedals are often the first part of a floorboard to wear out and we think keeping them separate is sensible, especially as the Profiler Stage can run up to four simultaneously.

There is a fully featured built-in looper as well as an automatic tuner with a highly accurate strobe-display option.

The Profiler Stage has main outputs on professional balanced XLR connectors, with ground lifting tucked away in the software.

Kemper’s Profiler Stage is the company’s most practical and accessible product yet, combining all the Profiler and Remote’s capabilities into a robust gig-ready package. Aimed at professionals and well-heeled amateurs, it’s an expensively big decision.

However, it costs less than buying a Profiler Head and Remote, and can potentially replace any number of vintage amplifiers in a player’s collection, replicating those tones reliably and consistently night after night, with practically unlimited possibilities for players who are prepared to put in the time to learn how it works.

Compared with the competition, we think it’s generally good value for money, although perhaps somewhat lacking in the display department when you look at the high-definition color and touchscreens found on other products, which use fewer switches as well.

Nevertheless, Kemper’s Profiler Stage is a serious professional-standard floorboard that has enough features, resources, technical support and creative potential to last a lifetime. If you’re ready to go digital, then this unit is very hard to beat.