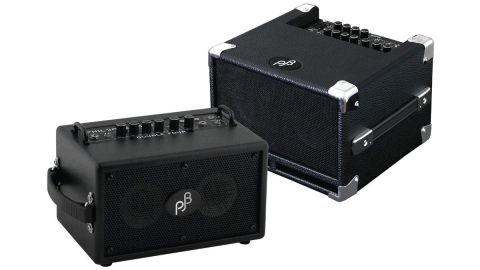 For many years, Phil Jones bass has been creating small solutions to one of the bigger problems we bassists face: amplification.

The company’s product line is stocked with unique designs, all with a focus on audio quality, portability, and practicality. With Class D power amps, switch-mode power supplies, and micro-size drivers in impossibly tiny enclosures, PJB has built a miniature bass amp kingdom.

Let’s look at two of his smallest models, the BG-75 Double Four and the BG-100 Bass Cub. While marketed as practice amps, could either of these tiny powerhouses make it in the outside world?

Roughly the size of a tissue box, the Double Four wins the award for cutest amp on the block, but underneath the industrial-strength powder-coated finish hides pretty cool technology.

PJB built much of its reputation using 5" drivers, but to achieve a smaller rig that delivered the signature PJB tone, the company designed the Neo Power 4" driver, put two of them side-by-side powered by separate 35-watt Class D amps, and connected them to a custom-designed “Rectangular Auxiliary Low Frequency Radiator.”

According to the PJB website: “RALFR is a pneumatically coupled radiator loaded to the rear of the two 4" speakers that operates at the lowest bass frequencies only. It augments the output of the loudspeakers at frequencies from 30Hz to 150Hz. It also reduces the cone excursion of the speakers, so power handling is greatly improved.”

Wait—did you say 30Hz out of a box you could bury your hamster in? The PJB specs list both BG amps as having 60Hz–15kHz response, but without the equipment to measure frequencies, I will only attest that if not pushed into overdrive, the Double Four will indeed represent a low B surprisingly well.

The control section is simple enough: a high/low impedance switch for the input is followed by BASS, MID, and treble controls for the DSP EQ. Next to master is a separate volume control for the AUX IN that accepts a stereo ⅛” jack. Connect your favorite sound source here. Of course, there is a headphone jack, as well as a line out to connect the BG-75 to a powered cab like the PJB PB300, or to a recording interface.

To keep it light, the Double Four uses an external power supply, and while the line lump is a mild hassle, the BG-75 can also be run with a portable laptop battery. Mr. Jones says it can operate for up to four hours on something like the Lenmar PowerPort.

The Bass Cub is only slightly larger than the Double Four, but with its different amp topology and pro features, it competes with more “serious” amps while offering similar portability.

The Bass Cub uses two of PJB’s 5" NeoPower drivers, powered by a 100-watt Class AB amp with a switch-mode power supply to keep the weight down. The BG-100’s ported cab takes a more traditional approach to low-end production, and the built-in kickstand lets you decouple with the floor and point the cab toward your ear.

The Bass Cub offers two channels, each with identical 3-band EQ. Channel A has a combo jack that accepts ¼” or XLR plugs with a 3-way switch. The high position is best suited to passive electric basses, while low handles the hotter output of active circuits.

Switching to mic position matches up with low-impedance dynamic microphones, but using a condenser mic will require a separate power supply. Channel B in HIGH position gives you a 4MΩ input that can handle any piezo pickup on the market without a buffer, making the Cub highly suitable for upright bass players.

Both channels run through the compression circuit, which has a preset 3:1 ratio. When activated, turning the control clockwise increases the threshold, reducing compression. The aux input has its own level control, and the headphone jack accepts ¼” plugs.

Around back, the Cub has features such as an XLR DI out with ground lift, tuner, and line out. With the amp’s internal power supply, a standard AC power cable is all that’s needed to turn on; battery operation is not an option.

While I own rigs of all sizes, there is much to be said for having a small setup for practicing. Beyond the portability, a mini-amp keeps me on task—it reminds me I’m supposed to be working—and the aux input lets me plug in my phone so I can use my practice apps.

Of course, if it sounds bad, practice becomes a drudgery to be endured, and my motivation wavers; I’m only human. Luckily, both the Double Four and Bass Cub deliver exceptionally well-balanced tone, with volume that surpasses expectations.

My current practice room is a relatively small space where even a small 12" combo is too much, but the Bass Cub is just right; I can play freely without feeling like I’m overpowering the room. The Double Four has accompanied me for several months of bus touring, and has proven to be the perfect size for practicing in the back lounge, or jamming with a guitar player in the front.

The two amps are similar in their basic footprint and intent—but oddly enough, while the Cub wins for features and stoutness, the Double Four wins for tone. Perhaps this is due to the increased speaker sensitivity and dampening factor achieved by the BG-75’s twin power amps, but within its practical volume range, the Double Four produces a sexy, rounded tone that can be molded for modern or traditional applications.

This is by no means to say the Bass Cub is lacking. I find the BG-100 benefits greatly from the additional power, and the varied inputs are great to have if you’ve got several different basses. In fact, the Cub straddles the line between the practice room and the gig with its increased headroom and connectivity.

With its many input impedance options, you can find the right dynamic response for active, passive, or piezo-powered instruments, and the tone controls are equally effective and versatile. Compared with the Double Four, the Cub has slightly less luster in the high end, but it packs more punch in the mids and lows.

As impressive as both PJB amps are with electric bass, the performance improves twofold with upright. Both amps provide piezo-friendly inputs and do a great job of amplifying the doghouse. With strategic floor placement of the Double Four, my Barbera-equipped upright filled the space with all the volume and presence needed for a light acoustic gig, and it’s been handy as a monitor during live radio spots with cajon and acoustic guitars.

The Bass Cub has shown itself to be a potent contender in the category of the world’s smallest usable amps. For kicks, I ran my Troll Ribbon Mic through Channel A’s combo input and blended it with the Barbera for what could be my ideal upright tone—it sounded punchy, detailed, full-range, and natural. The Cub proved to be more than enough on the low-volume jazz gigs it came to, and left me with the impression it could handle bigger action.

Even when presented with an amp in this size category, there is a temptation to see how well it can function beyond its intended scope, and both of these micro-monitors have proven themselves worthy of light-duty use out of the woodshed.

For my mobile lifestyle, these two little combo amps have become indispensable for practicing, informal jams, light gigs—even as a portable sound system. Adorable as they may be, the PJB BG-75 and BG-100 are serious amps that produce real bass tone, just on a smaller scale.