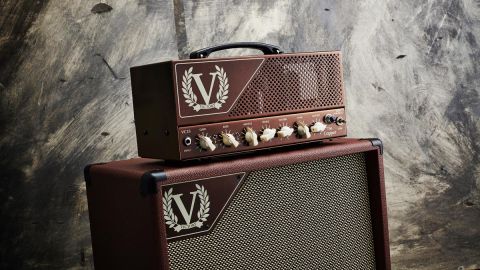 With tones to rival more expensive US boutique amps, and a responsive gain, the Copper is a legend in its own lunchbox.

Victory Amplification continues to establish itself as one of the UK’s leading boutique builders with an enviable artist roster that includes Guthrie Govan, Richie Kotzen, Rob Chapman and Rabea Massaad among others.

It’s fair to say Victory has the heavier end of the market well taken care of with amps such as The Kraken, but its range is more diverse than you may realize. To underscore that, the company has just released a new head that sits at the lower end of the gain spectrum, with a few special tweaks that make it rather unique.

Let’s say ‘Evenin’ all’ to The Copper. The Copper is part of Victory’s Compact Series, with an all-steel case and a perforated cover - the typical ‘lunchbox’ format that’s become so popular in recent years. Painted in a fetching dark metallic copper finish with white screen-printed logos and labels, it’s compact and portable, coming with its own padded gigbag that includes a pocket for the supplied two-button footswitch.

As you might infer from the name, there’s an oblique hint of Dartford inspiration in The Copper’s design, which uses a quartet of EL84s in its output stage, as well as a NOS EF184 pentode in the preamp. The EF184 is a small-format pentode, similar to the EF86 found on early Vox AC amps but with a little more gain.

It’s also been used in some valve microphones and hi-fi circuits, and was common in many early TVs. To our knowledge, there are no new EF184s currently being made, but thanks to the valve’s past popularity there’s a healthy NOS (New Old Stock) supply, with no likelihood of shortages.

The rest of the internals are typical Victory: robust PCB construction with one main board holding the valve sockets and front panel controls, a daughter board for the reverb, and smaller PCBs for the rear panel sockets. There’s quite a lot of wiring crammed into the remaining space, but it’s all neatly routed and tied.

The standby switch has a low power setting producing around 17 watts as well as the full-power 35-watt option.

The Copper's master tone control allows for quick adjustments after you've got your core sound dialled in.

Both the Copper's digital reverb and series effects loop are footswitchable

Victory describes the onboard digital reverb as being somewhere between room and plate, similar to its V40 amps

A relatively simple single-channel design, The Copper has controls for gain, bass, mid and treble and a master volume. There’s also a level control for the built-in digital reverb and a master tone control, making it easy to roll off or add a little top once your guitar is dialed in. Bass Cut and Mid Boost toggle switches help tailor The Copper to different guitars, and there’s a half-power option on the front panel-mounted standby switch.

On the rear panel, The Copper has a pair of send/return jacks for its series effects loop, three fixed impedance speaker outlets and bias test points with a recessed adjuster screw, making it easy and safe to keep the EL84 output valves running at peak performance.

There’s also a socket for the supplied footswitch, which toggles the amp’s digital reverb and switches the effects loop in and out. Helpful status LEDs on the switch tell you what the amp’s doing.

We tried out The Copper with a variety of different guitars, including a 1972 Les Paul Custom with the original embossed pickups, and our regular Seymour Duncan APS-2-loaded Strat. The Copper is easy to dial in for either single coils or humbuckers: we started by setting the master tone at halfway and then adjusted bass, mid and treble to suit.

The tone controls interact smoothly and precisely, with no peaks or troughs that can sometimes make an amp sound nasal or sharp. The EF184 pentode certainly seems to help evoke some of that vintage Vox flavor, adding a warmth and three-dimensional presence that’s lacking from many modern products. It’s well known that vintage amps fitted with EF86s often suffered from microphony. However, the EF184 in our sample was quite stable, even with everything on full.

Lower gain settings aren’t quite squeaky clean. There’s an addictive chime to chords that turns into a throaty, warm growl as the gain is turned up, with an articulate, smooth sustain that flatters single notes, especially on our Strat.

We found an ideal sound with the Bass Cut and Mid Boost switches both engaged and gain on around three o’clock, perfect for bluesy leads and easy to clean up with a flick of the guitar’s volume control.

Switching to the Les Paul, it instantly adds more balls and sustain, making The Copper perfect for classic rock and blues - think AC15 spiced with black-panel Deluxe. Like many boutique designs in this genre, it’s very responsive. However, unlike some amps that are merciless when it comes to sloppy playing, The Copper lets you off with a warning. Tighten up your picking a little and use the guitar’s volume knob to control the overdrive and you’ll be amply rewarded.

Subtle settings come off best here - we tended to keep the reverb level knob in the first quarter of its travel to add background ambience, teamed with an analogue delay to beef up solos.

Victory’s The Copper is a real player’s amp, with a strong transatlantic influence that makes it perfect for any guitarist working in that broad crossover area where blues, rock, jazz and country merge.

It isn’t a mega high-gain channel-switching rock machine, and while it works reasonably well with a drive pedal, the exceptional dynamics and sophisticated gain spectrum are best suited to those who know how to drive an amp using picking strength and the guitar’s volume control. Used like this, The Copper is capable of truly stellar tone, easily rivaling some coveted Stateside boutique brands.

Best of all, while The Copper’s sounds may be the stuff of dreams, its price is very much rooted in the real world – not the cheapest lunchbox head out there by any means but still achievable. Intended for vintage tone enthusiasts at all levels, Victory’s The Copper is a compelling new entry that deserves to be heard.