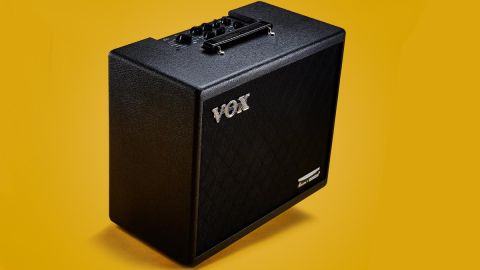 With its NuTube valve offering a traditional valve-like response and its onboard effects and amp modelling offering choice and lots of it, the Cambridge50 is a serious hybrid for the money.

When it comes to guitar amplification it’s particularly hard to overstate the longstanding influence of Vox.

Found in the rigs of pioneers such as Hank Marvin, Brian May, The Edge and, frankly, countless other icons of guitar, the company’s legendary AC15 and AC30 models have shaped the sound of rock music for more than six decades.

The Cambridge50 continues in the vein of the company’s Valvetronix digital modelling series of the early 2000s, employing a NuTube preamp valve alongside Virtual Element Technology (VET) and a solid-state power amp to deliver “realistic and stage-ready” sounds.

Analysing that statement, we’d agree that this is indeed a stage-ready offering - for small gigs at least. For a relatively lightweight amp, this Vox box dishes out impressive volume levels. It really is loud! And realistic? Well, yes, that too!

Perhaps unsurprisingly, the Cambridge50’s most authentic sounds come from Vox’s own AC30 and AC30TB (Top Boost) models. There’s a warmth and naturalness to these, and the breakup on the grittier TB model is especially pleasing.

Head into high-gain territory and you’ll find the Vox has a biting top-end. We found ourselves winding the treble right back to tame the highs on the

SL-OD and Double Rec models. A touch too much top-end perhaps? We’ll let you be the judge of that, but even if it does sound harsh to your ears, consider that it might be just the ticket to get you heard in a busy mix or over a heavy-hitting drummer.

Eight effects are included on the Cambridge50 – four modulations and four delays/reverbs – and, though you can’t dial all eight in at once (and, let’s face it, most players wouldn’t do so anyway!), you can save up to 11 presets.

That’s probably enough for most gigs and a fair reflection of the amp’s capabilities – this is a product designed for players who want to dial in their tone quickly, and not for those who want to go deep into menu editing.

Suffice to say you’ll get the most out of the effects via Vox’s included Tone Room editor app for Mac, Windows, iOS and Android, and there’s also an optional VFS-5 footswitch controller ($64.99/£60).

The NuTube valve is the ace up the Cambridge50’s sleeve though, helping to deliver a natural feel and response in those traditional Vox-inspired medium drive tones – and the amp certainly represents great value for money. Well worth a look!