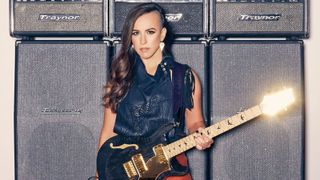 Most significantly, there was her stint playing electric guitar alongside Prince from 2013 until his death in 2016 - she served as co-lead guitarist in his hard-rock backing band 3RDEYEGIRL, touring the world and appearing on the 2014 album PLECTRUMELECTRUM, and also was enlisted as a member of his funk supergroup New Power Generation. So what does she says she learned from her experience with the legendary artist?

Grantis, it’s worth noting, has blown away more than a few of her fellow guitarists as well. Prince, reportedly, was impressed enough by her playing to not only have her in his bands, but also to offer to produce her album.

“He asked me and, of course, I said, ‘Yes,’ ” Grantis recalls. “It would have been an incredible honor.” And she has also found a major fan and supporter in Pearl Jam’s Mike McCready, who released a Grantis vinyl seven-inch on his label, HockeyTalkter Records, in 2018, and also appears on two of the standout cuts on Diamonds & Dynamite - the jazz-fusion-y Violetta and the fuzz-drenched workout Trashformer.

The eight instrumentals on the new album showcase Grantis’ expert mix of jazz fusion, blues, funk and searing rock (a Grantis-compiled Spotify playlist, which includes the likes of Mahavishnu Orchestra, Miles Davis, Jimi Hendrix, Jeff Beck, Bill Frisell and others, offers a pretty good idea of where her musical proclivities lie), as well as her prodigious skills as a bandleader and an improvisational soloist.

“I think it’s really cool, both on record and live, to give musicians the opportunity to stretch out and interact and respond to each other and play in real time,” Grantis says. “So the arrangements on the record allow for that and also leave room for the unexpected when we’re playing live.”

To that end, she thinks of her time on stage with Prince. “He would throw a solo over to me and say, ‘Come on, Donna!,’ that was always just the biggest thrill,” Grantis says. “I just think there’s something special about hearing musicians play whatever it is they’re feeling in a particular moment.”