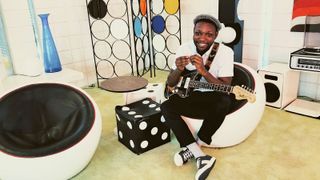 When NPR Music announced the results of this year’s Tiny Desk Contest, it was refreshing to see the award go to a guitarist with genuine chops. In his winning video entry, Naia Izumi showcased an impressive arsenal of techniques including percussive two-hand tapping, soulful tremolo work and fluid R&B-style chord riffs.

Izumi, 34, honed his playing by busking the streets of Los Angeles, where he’d record his performances and post them to YouTube and Facebook. He gained a small but loyal following online, and a few fans eventually encouraged him to submit a video to the popular Tiny Desk Contest. Several months later, “All Songs Considered” host Bob Boilen called to inform him he was the winner, followed by a performance at NPR Music headquarters in Washington, D.C., and a national tour.

“It kind of took me by storm,” Izumi says. “The tour, meeting all these amazing musicians — it was really a great experience and has opened so many doors for me.”

Izumi was raised in Columbus, Georgia, where he first picked up the guitar to play gospel music in church. He quickly developed a passion, studying styles ranging from country Travis picking to the complex polyrhythms of math rock.

“I’ve never been stuck in one genre,” he says. “I’ve always ventured out and hung out with a lot of different people. I lived in a trailer park where I’d hang out with old blues guys and play on porches, and then I would go play with punk kids and get into all kinds of stuff.”

Izumi — who currently identifies as male — previously identified as a woman for about seven years until de-transitioning to male last year. The song he submitted to the Tiny Desk Contest, “Soft Spoken” (originally titled “Soft Spoken Women”), addresses the prejudices he often faces for how he presents himself. He says that while some have been critical of his gender identity, he’s never felt stigmatized by other musicians.

With his new-found renown as a Tiny Desk winner, Izumi is excited to introduce himself to a wider audience who may not be so familiar with guitar-based music.

“I take it as a challenge: Can I create something that is relevant and fun for people who are super absorbed into the electronic culture we live in?” he says. “Can I get them to be into what I’m doing as a guitar player?”