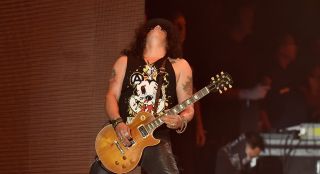 With its gutter-punk attitude and the raunchiest dual-guitar attack since Aerosmith’s Rocks, Welcome to the Jungle was the perfect choice for the first U.S. single release by Guns N’ Roses in 1987.

The song made a potent first impression, mostly thanks to Slash’s dramatic delay-driven intro, massive power chords and blues-infused solos, which made a perfect foil for Axl Rose’s wailing vocals.

Slash’s tone throughout the song comes courtesy of the timeless Les Paul/Marshall combination. While metal guitar tones of the time were all about scooping out the midrange, Slash’s tone is predominantly mids.

For most of Jungle Slash’s tone is bone dry, but on the intro and for a few special stab and slide effects, producer Mike Clink employed a favorite secret weapon - the Roland SRV-2000 Digital Reverb.

While the SRV offers outstanding reverb effects for guitar, it also can convert into a dedicated digital delay unit by holding down a “secret” control button configuration when powering on, which Clink used for the intro.

The SRV unit plays a crucial role in Slash’s sound throughout Appetite, including the intro to Sweet Child O’ Mine.

TONE TIP: Place the delay in the Marshall’s effects loop and set the controls for a dotted-eighth note delay, about five-to-six repeats and a 50/50 wet/dry mix for a combination of rhythmic delays and reverb-like decay.