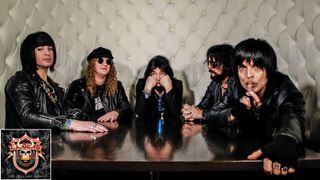 “Phil’s voice and my guitar is the true sound of L.A. Guns,” says band co-founder and namesake Tracii Guns. For years, Guns and Phil Lewis maintained their own unique versions of the band, touring and releasing numerous albums. While both incarnations produced some great music, what fans really thirsted for was the reunion of the two main men. Fulfilling this wish by reuniting in 2017, they exceeded all expectations with The Missing Peace, an album that’s easily comparable to the band’s early classics. A live album was released last year — and 2019 brings us The Devil You Know, a second studio offering from the newly revitalized outfit.

“Phil and I really like to work hard, to be productive,” Guns tells us. “My house is like a studio, so whenever I get an idea I’ll lay it down, and the best ideas go to Phil to put his lyrics and vocal line on top. It’s a really efficient process. I think we’ve both been really inspired by the response from the fans. I didn’t realize we had so many fans! The increased interest in the band is really exciting.”

L.A. Guns have always had a special chemistry — the desperation-tinged vocals of Lewis set against Guns’ killer riffs. Both are still at the very top of their game, and the music they’re making is the most vital that Guns or Lewis have produced for many years.

“I think you take everything you’ve learned; every time you work on something, it should be better than the last. I’d be horrified if I put out an album that I didn’t think was better than the previous one,” Guns says.

For bands that knew major success back in the heyday of the music industry, it can be sobering to see how little money and support is available from record labels these days. As a result, new ways to adapt and survive have to be found; it’s survival of the fittest.

“I think we’re probably doing as well financially as we were back in the early years of our success. We’ve got a name and a great back catalog. We’re too big to support a certain level of band, but we’re not filling stadiums. We have the same amount of income, but we pay about 90 percent fewer people. Experience teaches you how to make it work; there’s no shortage of opportunities for the band. We try to take on as much as we can. We’re both committed to L.A. Guns.”