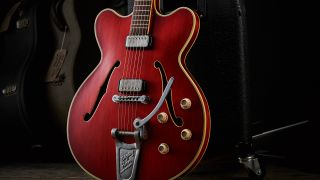 The Hofner instrument manufacturing company was founded in 1887 in the former Austro-Hungarian town of Schönbach (now Luby, Czech Republic) by Karl Höfner, a skilled violin maker.

In the wake of World War II during the late '40s, Karl’s sons, Walter and Josef Höfner, resettled in Bavaria, Germany, where they began rebuilding the family business, of which guitars had been a significant part since the 1930s.

By the early 50s, Hofner was making electric guitars and soon began to export a great deal of its production, thanks in part to a UK-USA trade embargo that ensured American guitars from the likes of Gibson, Epiphone and Fender were not imported into the UK in any significant number until the early '60s.

As jazz and skiffle music became ever more popular in the UK throughout the '50s, demand for electric guitars increased exponentially. London-based retailers Selmer led the way in the UK for the Hofner brand, its catalogues increasingly featuring American-inspired Hofner guitars with unique American-inspired names such as the Congress, President and Senator (elsewhere, the equivalent Hofner instruments were allocated basic model numbers).

Clearly, American guitar culture was a major influence on the Hofner/Selmer venture throughout the '50s, and in 1960, while following in the footsteps of Gibson’s ES-225TD, ES-350TD and ES-330TD dual-pickup thinline electric archtops, Selmer released the Hofner Verithin (known outside of the UK and Commonwealth as the Hofner model 4574).

With a double Venetian (rounded) cutaway, hollowbody archtop construction, double f-holes, laminated maple back/sides, single bound rosewood ’board, and dual single-coil pickups, the Verithin is highly reminiscent of Gibson’s ES-330TD - especially when finished in Cherry Red (the revised standard finish soon after its release). There are some important differences such as its laminated spruce top (ES-330s have a laminated maple top) and three-piece maple/beech/maple neck (as opposed to the ES-330’s single-piece mahogany neck).

Fitted with either a ‘lyre’ tailpiece or Bigsby ‘tremolo’ system throughout the 60s, the Verithin changed pickup type several times. The earliest guitars feature ‘toaster’ single-coil pickups (so called because the metal cover resembles the top of an electric toaster), and by 1961 these had been superseded by ‘diamond’ logo Type 510 single coils.

Much like the Gibson ES-330TD, the Verithin was discontinued by 1972.

The evolution of the Hofner Verithin

SERIAL NUMBER - Four digits and model info (‘Verithin’/‘Bigsby’) ink-stamped onto white rectangular label located on inside back underneath bass side f-hole.