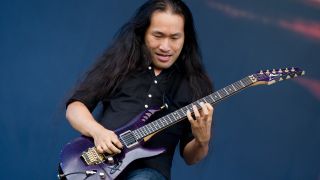 You have a very definite musical and technical style. I’d like to know if, when no one’s watching, you play other styles. Maybe some blues, jazz or reggae? -David Alvarez

"I will play blues or maybe jam along to a fusion album when I’m at home, but I don’t see myself as a guitarist that is most effective in these genres. I don’t think I can do a million different styles effectively. I am a specialist in my own weird guitar sound."

After five or so years of following DragonForce, I’ve looked up live performances for pretty much all your songs, but I haven’t found any trace of one of the fan favorites (and one of my favorites), Cry for Eternity. Why is this - and will we see you play it soon? - Michael Thewlis

"We’ve never played it live, but we actually just started rehearsing that song for the next tour as a lot of fans have been asking for it. That song came out in 2006. It’s an eight-minute song with a million guitar parts. The joke when we were learning this song is that it was like learning four songs at once.

"It takes some time, so we don’t want to play it until it’s completely ready to go. Maybe we set the bar quite high when we recorded it. We were younger and interested in doing as many guitar solos as possible."

"I like the one on Dreams. It’s not complicated but it is memorable. There are millions of great ones. The ones on [Van Halen’s 1991 album] For Unlawful Carnal Knowledge are his best work, I think. People don’t think as highly of that album as others so they might give me shit for saying it, but I still believe it features his best playing."

Artists - like chameleons - develop and evolve without knowing it. What do you appreciate most about how you’ve evolved over the years? Do you find you enjoy learning and picking up elements of different genres of metal or creating your own? - Christopher Vizcarra

"I think when you look back, you do think, 'Wow!' The first album is nowhere near as good as the last album. The fans will often still think it’s the best because it’s the first one they got into, perhaps. My evolution goes beyond the guitar, so instead of just trying to play the guitar all the time, I learn other things that will help my guitar playing.

"As a musician you want to make the show better - make it a better experience for the fans that come to see DragonForce. Don’t just practice the guitar - learn about production, video technology, the ways you can make things better for the fans."

I love the band’s new album, Extreme Power Metal. Which of your solos on the album is your favorite? - Isaac Pterodactyl

"I like the solo on Cosmic Power of the Infinite Shred Machine. The title almost says it all! Not because it’s a really fast solo but because I was able to replicate the sound of a platform video game character jumping across the screen with the slides and stuff to give that Eighties or Nineties game feel."

Are you finding that streaming on Twitch has increased the amount of people you’ve reached versus traditional media like TV shows and magazine interviews? Has this in any way correlated to an increase in concert attendance, or fan interactions or streams or downloads? - Lester Santos

What made you want to play Ibanez guitars over other brands? - L. Viator

"When I was growing up, I saw that Steve Vai, Joe Satriani, John Petrucci and most of my other favorite guitar players were playing Ibanez. That’s what drew me to the brand, and I’ve played them ever since - but I’m not limited to just the one brand. In my house right now, I’ve got a John Petrucci Ernie Ball Music Man, a few PRS guitars, even a Fender Strat."

Do you like to play Super Smash Bros.? - King Blue

"I’ve played it a bit but I’m not great at it. It is a very complex and technical game, but I don’t really have the time to memorize all the moves of the players and how to fight in the battles. I think that is what is so cool about it, though, that it’s so technical."

Is it true that you invited popular YouTuber Stevie T [guitarist Steve Terreberry] to play the triangle on tour with you? How do you rate him as a guitarist? And how do you feel YouTube celebrity guitarists in general? - Mark Ellmore

"We did invite him to play triangle and to play the bass. Unfortunately, he pulled out two weeks before the tour. We’re always up for doing something crazy. The whole YouTube world is very different from the live stage. It’s different worlds but they all have their own skills, sure.

"The YouTubers often have great video production and editing skills as well as being great guitarists. Making interesting content is a great skill. Stevie is a really good guitar player. I’ve spoken to him a lot and his main problem is that he’s anxious about playing in front of people. But he has some great videos and he can make a lot of people smile."

How did DragonForce start up back in the day, and how did all of the numerous band members meet? - VenomThor2

"I met [guitarist] Sam [Totman] in London and he had some songs, and I wanted to do this kind of music… so that’s how we started, basically. We used ads and the usual ways to find others to join the band - the way most bands start up, I suppose."

What were your initial intentions when you began writing and producing Extreme Power Metal? - Cameron Morris

"Just like all the albums - to go full-out, no limitations with no one telling us what to do. That means full-out on every level, including artwork, songs, touring, production and promotion from top to bottom.

"It’s the first time for many years that we made an album with no one telling us anything that they wanted us to do. It was Sam and I making all the decisions on how this one would go."

Your guitar style pays homage to many of the classic REH and Star Licks VHS tapes. Which of those players from the different series helped shape your technique and sharpen your skills? - Alex

"In particular, it was the Frank Gambale, Reb Beach and Brett Garsed tapes. I watched pretty much every one. The Michael Angelo Batio Star Licks tape showed me about going crazy on the guitar, how to make exciting, weird, crazy stuff.

"There was a music shop that I lived near that used to rent them out. They were really expensive to actually buy back then. I could have never afforded that, but it was cool to be able to rent them."

As far as you are aware right now, what’s your most valuable guitar? - H. Munck

"I have a chrome anniversary Joe Satriani model and a Private Stock PRS. One of my guitars that was sold for charity went for $17,000, so - on that basis - maybe the one I’ve played for the last 10 years would be the most valuable. I don’t buy guitars, and vintage guitars are extremely expensive."

What’s the most difficult part to compose - a song or a solo? - Héctor Daniel Sánchez Ortiz

"The song, of course. Without the song there’s nothing to solo over. The song will suggest ideas for the solo anyway, but the song is always the most important thing."

How many hours a day on average do you tend to practice and how long did it take you to be able to sweep pick to the incredible standard that you’ve reached? - Adam West

"I’ve played for more than 20 years now. There’s no limit to a standard you can reach. These days it is very hard to find time to practice. I might spend time working on songs or ideas, but I don’t really have a routine where I’d maybe have a metronome and run scales.

"When I did have the time when I was younger, I’d practice for about eight hours a day. To learn sweep picking doesn’t take long; it just depends on what you want to do with it. I still use shapes that I learned early on. Just because something is simple, that doesn’t mean it isn’t good. Often the simple things sound better.

"Of course, I still play a lot, when we record or we’re playing live. When I’m doing that, I suppose it is still practicing, in a way, particularly reinforcing things like muscle memory."

What do you think you would probably be doing right now if you weren’t already in a successful touring rock band? How would you make a living? - Lyri Cummings

"Before I transitioned into becoming a full-time musician, I was working in IT. I’d still be an IT computer expert/nerd, whatever you want to call it. I’m still doing that now, really. I’m in a band but I’m dealing with IT things all the time. Twitch, editing videos, etc. It never goes away."

Is there a genre of music you can’t stand? - D. Kustow

"It depends on where I am and what I’ve been doing. If I’ve been on tour playing really loud every night, I’d probably prefer to listen to something quieter or more mellow. On the other hand, the opposite is equally true where if I’m going out at night, sometimes I’ll really want to hear some loud, thrashing death metal.

"At any time, those genres could be my least or most favorite. I don’t have most- or least-favorite anything in life. I just don’t view the world that way."

Is there something you’ve never been asked that you wish someone would ask you? Be honest! - Casper Blue

Were you a quick learner? Could you tell you were picking things up quicker than your friends? - Elliot Cuerden

"No, I wasn’t a quick learner. I don’t think I’m particularly talented in any way and I didn’t pick things up any more quickly than friends. I practiced hard and worked on my playing until I could play whatever it was that I was trying to learn.

"Someone might be particularly talented and learn something more quickly than me, but I always think that if I work hard enough, I will be able to play anything. It might take weeks of work but as long as I put the effort in, I believe I will get back what I put in.

"Everybody should think that way because there is no reason to think you can’t do something if you work hard enough at it. That thought should inspire anyone who is struggling to learn something."