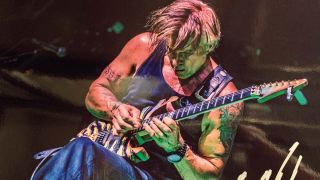 Although Lynch and Don Dokken had their differences over the years, they’re certainly on good terms now. Lynch Mob, in fact, planned on touring with Dokken in 2020, with Lynch joining Don for four songs each night. Still, Lynch Mob remains the “day job,” with a new album due out this summer.

The always-prolific Lynch has recorded a number of collaborative albums over the years, the latest of which, Dirty Shirley, is a hook-up with Croatian-born singer Dino Jelusic of Animal Drive, whose powerful vocals are redolent at times of the best of Dio.

The songs are uniformly strong, with more than a hint of classic rock in the mix. Of course, Lynch’s love of the golden era of blues-rock is clearly on display.

How’d you come to hook up with Dino?

“It was the brainchild of the people at Frontiers Records in Italy. They asked me if I’d like to write the music and manage the whole production. I had a slight misunderstanding about the project initially and thought it was an Italian-pop kind of thing.

“It seemed like an interesting challenge, so I began to write in that vein, but of course when the stuff came back from Dino, I was pleasantly surprised to hear what he actually did. I changed gears at that point, but we did leave a little bit of that stuff in there for the sake of variety. There’s a real wide variety of styles on the record.”

Is this a one-off project?

“You never know. I don’t do projects with the expectation of it becoming part of a continuum, but I always hope it might be. It depends on the obvious things like the level of interest and critical and fan appreciation. There also has to be a creative reason as well, beyond the commercial considerations.”

Are you happy with the way the album turned out?

“For the most part, but you’re never completely happy. Considering it was done remotely, with all the members’ contributions, I’m actually amazed at how seamlessly it hangs together. I’m a very self-critical person.

“For instance, on Wicked Sensation, the first Lynch Mob album [1990], we had a year-plus and a massive budget. We probably recorded that album three times. Nowadays, I’ll probably write and record a song in one day, so effectively that’s 12 days to record an album. That’s the clearest comparison between then and now.”

The album cover is kinda weird. What’s going on there?

“[Laughs] I wish I had a good answer for you. I don’t want to throw Dino under the bus [Laughs]. We had a couple of submissions, which neither one of us liked, then somebody threw that at us from the label and Dino liked it. I’m wondering which one I am – the guy or the girl? [Laughs]”

“I couldn’t name a guitar player that Jimmy Page hasn’t influenced. I was in my teens when [1969’s] Led Zeppelin came out. It was one of my early rock influences. My drummer friend and I would put that on the record player and go out to try to be that. Just to even look at what he’s done on a production level as well. The sounds he got. It fascinates me.“

And Cold has a Page-plays-funk vibe.

“Yeah, white people trying to play black music, I guess! What I love from that era is the sense of not knowing what the rules are, since there weren’t really any rules back then. The jamming and improvisation. It seems like a sad loss.“

Escalator to Purgatory has quite a funk-styled groove as well.

“Absolutely. I’ve listened to a lot of James Brown and Sly Stone, anything I can get my hands on in that vein. Fessing up here, there’s probably a lot of Zeppelin’s Dancing Days in that one.”

Grand Master has an Indian vibe; where does that influence come from?

“I love the exotic scales and time signatures and trying to incorporate that as much as I can into my playing. That was done on a Hindustani 21-string guitar, and the hand drum is me just playing with my fingers on the body of the guitar. It’s just free time, no click or anything. It’s sloppy but it’s real.“

What have you got that’s brand new, gear-wise?

“I’m such a gear-obsessive, it’s just crazy. I’ve recently acquired a ’61 Les Paul SG, which is all-original hardware and pickups. On the amp side I’ve just got a British Sixties Watkins Dominator, and I’ve been using a Rangemaster Treble Booster with that. I’ve also acquired an original Clyde McCoy wah pedal.“

It’s notable when looking at your playing over the years that you’ve never been afraid to underplay. There’s always plenty left in the tank.

“One of my favorite solos in the world is Cinnamon Girl by Neil Young. It’s just one note. There’s so much to say without playing endless streams of notes. I try to explore all the parameters of guitar music and composition. I’m always aware of the value of subtlety and silence. Speed and angst have their place, but I think you should incorporate all the elements in an intelligent way.“

The question always crops up about when you’re going to do an all-instrumental album of original material. Are you any nearer to it?

“I’ve been thinking about it. I think it would need about a year and I would need to make it almost a worldwide experience. I like the idea of composing and recording each piece in a different place around the world. Maybe Joshua Tree, then Easter Island, then off to another location.

“I think it would be a fascinating story to see what the environment creates and then document the process and the gear, and use historically significant equipment. I have access, via friends, to some Hendrix and SRV and Joe Walsh gear and a lot of other classic equipment.

“It would be expensive and logistically challenging. Probably baby steps would be the way to go. Just record one, then have a think where to go next – maybe incorporate a recording project with a business trip to Japan or something.“

What do you feel you’re working on in your own playing?

“I’m at a juncture right now where I think I need to bust through technically and apply and reinvent myself a little bit. I’ve talked to a friend of mine who I’m going to sit down with and take some tutoring. I’m going to apply myself to that this year and stop resting on my laurels.

“My one big thing is that I don’t know theory. I don’t think I’m going to actually work on that so much, but I’d like to be better at playing over changes. Maybe dive into a little bit of bebop. I’d also like to work on slide, get a little more proficient and work on some tunings.

You always boasted a lot of really cool, distinctive guitars. Do you still have all your old gear?

“Yeah, most of them. There’s been a few that have been lifted over the years. My ESP 'REH' guitar that I used in those videos, my tech left it at a music store called Music Works where we used to rehearse – at Redondo Beach.

“My 'graffiti' guitar just disappeared out from under me. Turns out one of my band members had sold that. I’ve had quite a few techs that have lifted many guitars over the years, some of which I did subsequently get back. There’s a special place in hell for gear thieves.“

Given the changing nature of the music business, how do you make a living from rock in 2020?

“Be diversified. Do everything. Be an engineer, be a composer, play every instrument you can, get endorsements, learn how to make a website, be social-media savvy and keep your eye on everything.“