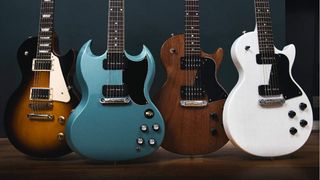 After Gibson emerged from its financial travails with a change of ownership, the company hit the reset button. Quite literally, Gibson was restored to factory settings. Large sums were invested in quality control.

The collection was simplified. The brief was simple, too: put pro-quality, aspirational guitars into the hands of players who have always idealised the brand. One of the most significant changes to Gibson’s lineup is the split in the production line range between the Original Collection and the Modern Collection.

This SG Special in Faded Pelham Blue is from the Original Collection; the Les Paul Tribute and the Les Paul Special Tribute with dual humbuckers and dual P-90 options are from the Modern Series.

Retailing for under a grand, the Tribute models potentially represent the best of both worlds – an American-built Gibson that won’t break the bank. The spec options look neat, too.

The big news with the SG Special is that finish, yet under the hood there are 500k audio taper CTS pots and hand-soldered Orange Drop capacitors. The Tribute models pare back the spec a little but they still offer plenty of guitar. Hmm, choosing between these is gonna be excruciating.

That finish is amazing...

It is. It is Faded Pelham Blue, and it dates back to the early 60s when Fender was taking inspiration from classic automobiles and rolling out a host of cool solid-block colours, and Gibson wanted in on the action. Introduced on the budget Gibson Melody Maker line of SGs, it’s now a cult favourite, championed by the likes of John Shanks and Dave Grohl.

You mentioned 500k CTS audio taper pots. Why is this good?

One of the coolest feature of any guitar – and one that is still criminally under-explored by so many of us – is how tweaking your tone and volume controls can unearth all those extra magical tones. With inferior pots, you are lucky if there are two usable tones. Here you’ll find new tones on 1 through to 10 on the dial.

What’s the difference between this and an SG Junior?

So you noticed the white button tuners and dot inlay – that’s the same, but the Special has two P-90s and a binding on the neck. Yeah, sure, it’s stripped down – kinda – but there is some luxury there.

What’s the difference between this and the Les Paul Tribute?

Here, there is no maple cap. This saves the maple for the neck, which is glued to a solid mahogany body. Both have a satin finish in a nitrocellulose lacquer that on this review model still feels a little oily, and this will settle down as you rub the ‘new’ off it.

We’ve seen those pickups before, right?

These open-coil Gibson 490 humbuckers have been kicking around since the mid-to-late 60s. They feature an Alnico II magnet and were wound to create a more versatile PAF ’bucker that could work better with high-volume amps and new rock styles, and were often wired so they could be coil-tapped. They have a soupçon more upper-mids than the PAF.

We’d always associate Gibson guitars with mahogany necks but through the 70s it was not uncommon to see maple necks as standard. Besides, it’s nice to see some variation on the theme.

This is the same guitar, but with P-90s. Does that make much difference?

Massive. Where the 490 humbuckers offer you enough rounded PAF cream to cause an arterial block, the P-90s are a more about being all sharp and vinegarish top-end and a pugnacious mid-range. You’ll get a lot of joy from blending these together and playing around on the tone controls. There’s a lot of tone here.

Won’t they be noisy?

They might not be as quiet as humbuckers but they are wax-potted to kill microphonic hum, which is the worst. Don’t be put off by the fact they are single-coils; these are totally mean. If you are looking for a rock ’n’ roll machine...

So this is just a rock guitar?

It could be. The P-90 and mahogany slab body combo is a classic pairing; it’s cheese and burger, a tone combo that the likes of Leslie West would wield judiciously. But here’s the thing: P-90s clean up beautifully. Roll back some of that back pickup’s top end and the cleans are worthy of a chef’s kiss before getting down to some jazz.

A Les Paul, made in the USA, and you’ll get change from a grand?

Yes, there’s no catch. You might even find these discounted online. The Les Paul Tribute is kind of somewhere between a Standard, a Classic and a Studio. Like the Studio, there’s no binding on the neck. Like the Classic, this has 490 humbuckers and it has extensive chambering to make it lighter. And you’ve got the chrome-covers on the pickups to give it that Standard vibe. It’s classy.

Tell us more about the weight relief...

Gibson’s Ultra-Modern weight relief process is an evolution of its nine-hole and chambering patterns that have been used on guitars such as the Les Paul classic. It features a number of chambers around the body’s perimeter. If you’re playing live a lot you’ll appreciate it.

What else is new?

The satin finish is something we haven’t really seen before and it might take a bit of getting used to. Some will love it. It’s tactile and more subdued than the high-gloss. The body isn’t bound but the maple top gives a similar effect.

Across the board, the Tribute Les Pauls have rounded, C-profile maple necks that feel like a fair compromise between the thicker 50s profiles, those bats you’d get on vintage Explorers, and the slim-tapered necks of the 60s SGs.

We would have liked a little more meat on the bones, but that is the thing with neck profiles, preferences differ, and they change over time, sometimes within hours. And these Tribute Les Pauls, dammit, sure offer a comfortable ride.

Switching from the LP to SG always requires some adjusting to the fretboard geography; the scale length is the same but there just feels like there is so much neck on the SG as it joins the body at 22nd fret. The SG feels slick and speedy, with a nice taper going on with the neck. It’s super-easy to get up the dusty end of the fretboard.

If the Les Paul Tributes feel ostensibly the same, albeit with less bulk around the body on the Specials, plugged in there is enough variance to give you pause for thought.

The LP Special with humbuckers has a real gutsy tone. There is plenty of midrange to chew through rock riffs, and the 490 humbuckers have a Pavlovian response to more gain, letting you easily find that singing sweet spot for your solos, and crunch for digging in.

On the Les Paul Tribute, there’s a little more high-end, more noticeable in the bridge ’bucker, but there is so much play on the Les Paul’s controls that finding the right blend is easy.

The P-90 equipped LP Special has more high-end still but it is tempered by the hot-mids these soapbars are renowned for. They are deceivingly versatile. For a stripped-down singlecut experience, it is hard to beat. But for a few dollars more, the more refined experience of the SG might be more your speed. It too can perform as a rock machine, with similarly hidden depths there, and an all-time classic finish.

Gibson’s idea of splitting its collection into the Modern and Original makes sense. It keeps the purists happy while giving the company room to evolve.

One sign that it is working is that on first impressions it was only the fact that the SG Special arrived in a Gibson hard case that distinguished it from the others, which arrived in padded gig-bags. Any gap in quality is incremental. All the guitars here are immaculately finished.

The question is which serves your needs the most?  Those looking for a more stately Les Paul experience should plump for the Tribute. The 490 humbuckers are so underrated, and tone-wise this has the most ‘Standard’, most stereotypically Les Paul tone here.

But then there’s the brawny cool of the humbucker-equipped Special. With its five-ply guard and white button tuners, the no-fuss dot inlay, it’s a gnarly slap of mahogany that’s ideal for rock, blues, maybe even metal, too, and the walnut finish is just darn classy.

And so, we are left with two guitars that support the hypothesis that says the P-90 soapbar is pound-for-pound the best pickup ever. Either way, they make the LP and SG Specials so persuasive, running the gamut from blues-rock nirvana to smoky bar jazz.

Many will go for the singlecut, the weight, the extra oomph of sustain, but the SG Special in Faded Pelham Blue is just the sort of get-it-while-it’s-hot guitar that will age beautifully, and will reward you with a supremely playable instrument and, possibly, a future classic.