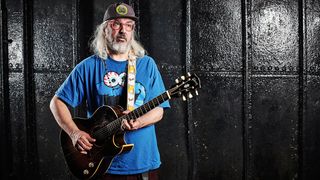 As the songwriter, vocalist and guitarist of hard-rocking indie pioneers Dinosaur Jr., and with two Fender signature electric guitars to his name, J Mascis is perhaps better known for wielding a heavily fuzz-laden Jazzmaster in front of a wall of Marshall amps cranked to ear-splitting volume than strumming a rare 1950s Gibson flat-top.

Yet despite J’s punk-rock roots, he has long been renowned for his dynamic live solo acoustic performances, as captured by his 1993 debut acoustic recording Live At CBGB’s (released in 2006) and 1996’s live solo album, Martin + Me.

Following the release of 2018's mesmerising acoustic LP Elastic Days, we caught up with J in the midst of a UK tour to find him playing an equally fascinating choice of guitars.

It’s unusual to see a Gibson CF-100E being gigged. How did you discover them?

“Gibson made them in the 50s. It’s the same neck as a Gold Top – that’s why I got into them. When Gibson did their [centennial] anniversary series, they had a different acoustic every month for a year and I got a [1994 Gibson 1950 CF-100E]. That was the first one I got. Now I have five altogether, with that newer one. Two are CF-100s and the others are CF-100Es. But one of the [CF-100Es] doesn’t have the pickup or knobs. It was trashed. The previous owner took the electrics out. He decided it sounded better without them in because it didn’t buzz as much. Most of the [Gibson CF-100E] guitars are in Japan and they’re expensive over there. [Tamio Okuda] plays one. He’s got a signature model with Gibson.”

How do these old 50s flat-tops manage to survive on tour?

“They’re a little fragile. I went to Australia from winter to summer and the neck went a bit weird on one of them. The frets were popping out. I had to get it set up again.”

It’s perhaps even rarer to see a CF-100E being used with effects pedals. What’s on your ’board?

“It first goes into a JangleBox compressor, which I use occasionally. Then it’s a [Z.Vex] Silicon Fuzz Factory 7. I think they only made six of those. I like them better than the germanium ones. I prefer the tone – it’s a little bit tougher sounding. That goes to the A/DA Flanger, then the [MXR] Carbon Copy delay, and then to the [Z.Vex] Lo-Fi Loop Junky. And I’ve got a [Boss Waza Craft TU-3W] tuner. You can tell the signal sounds a bit better going through it, and the lights are different colours. I’m singing through the [Boss DM-2W] Waza Craft Delay. I was using a Moog [Minifooger MF Delay], but it broke and I haven’t had a chance to get it fixed. I like the Boss pedal for singing because I don’t have to look at it as much. I just hit it now and again.”

What amps are you using on this tour?

How do you find the hand-wired reissue amps compare to the originals?

“The Marshall [1959HW] hand-wired Plexis sound pretty good. But I notice that some of the Marshall Plexi copies sound really weird. I mean, maybe that’s how Marshalls sounded when they were new,but I don’t like it. Some of them are really oppressive sounding. They’re almost too loud or something – like too much low-mid and no pizzazz.

"I’m not used to Marshalls at 240 [volts] either. It’s a different sound.I really notice it. It’s a bit louder, there’s more low-end and it’s more powerful sounding. I’d rather just play them at 110 [volts] if I can because I’m used to that. If I want to bring my own amps on tour, once in a while I’ll ship one or two over and use a [mains step down transformer], but I don’t bring that much stuff over here. I use them more often in the States.”

Do you collect amps?

“I’ve got a lot of amps. Mainly Vox, Marshall and Fender. I like Tweed Fenders. I’ve got a Deluxe, a Champ, a Bandmaster and a high-powered Twin. I know a Vox collector in America, and I’ve picked a few up, but I’d like to have more. I’d like a ’61 AC15. I looked at one over here eight years ago and the guy wanted £3,000. Two years ago, it was still in the shop, but he wanted £5,000! I prefer gear that’s been fucked with because it’s cheaper. That’s kind of my style – refinished guitars and shit that’s cheaper, rather than museum-quality stuff. Then I can buy more and feel better about using it. I don’t want to spend £5,000 on an amp.”

A lot of guitarists seem to like recording with Vox AC15s…

“I used a hand-wired AC15 for some leads [on Elastic Days]. I tried to play all the leads on acoustic. It’s a different sound playing leads on an acoustic, but I just got burnt out and ended up using electric for some of the songs. I normally play leads on Fenders – I used the ’58 Telecaster and I used a Jazzmaster for four of the songs, but the others are acoustic.”

“It’s my favourite guitar. I play most of the solos on my records with it. It was refinished when I got it, so I painted it blue sparkle. It had a ’56 pickup put in which has a really nice kind of P-90 quality. It’s a toploader guitar. There are no holes in the back. I’m used to top-loaders. It’s a little easier to bend [strings]. A lot of Tele people poohpooh the top loader, but I don’t know why.”

“It’d be fun to have a ’54 Strat. The first Strat I got was a Roland Ready Strat to play guitar synth with back in the 90s. Then I got a Rory [Gallagher] Strat. I’ve got a ’59 Strat. It’s got gold hardware and it’s been refinished black – well, almost black, it has a bit of a grey tinge to it. I saw a video of Stevie Ray Vaughan playing a Strat in the studio and it looked like the same guitar. Maybe it was Stevie Ray Vaughan’s! [laughs]

"The problem is, I find myself playing stuff that just sounds too much like a Strat. I like Teles and Jazzmasters better. I don’t always feel like myself when I play a Strat. It makes my fingers go a certain way. My ’59 Strat has got a tiny neck. Sometimes I like a bigger neck, but I don’t have a preference; it just depends on the guitar. I don’t know until I pick it up. It’s more about the whole guitar.

“I like jumbo frets, though. I’ll sometimes get my guitars refretted. I’ve had a Mosrite for years that I never played because the fingerboard was like a rollercoaster, but I just got it fixed with a new fingerboard and put jumbo frets on it. I bought it in the early 90s for, like, 200 bucks and it was pretty fucked. I’ve just spent 500 bucks fixing it. It’s a bit like my late-60s Brazilian rosewood [Martin] D-28S: it went in for a setup and repairs – they fixed the braces and moved the bridge – and the difference is like night and day. I got my D-28S fixed because it was kind of getting hard to play, but I really like that one now. I recorded a bunch with that [on Elastic Days].”

“I like how wide the neck is. The first Martin guitar I got was also a 12-fret model; I really got used to that neck. So I was told, it was an experimental model from the 60s.The [factory staff ] would sometimes make some wacky guitar for themselves and it’s one of those. It’s pretty cool. It’s a smallbodied guitar, a bit like an old [Martin] New Yorker or a classical.”

Some people find rosewood can be a bit boomy when recording. How did you go about recording the D-28S?

“I guess you can always cut the low-end later in the mix, but I tend to go for boomy. I use two 4038 Coles mics: one near the neck and one near the body.”

Did you mostly use the D-28S to record Elastic Days?

“That and a 50s [Martin] D-18. I mainly used those two, but also a [Martin] 000-18, a ’65 [Gibson] Dove and that old experimental Martin occasionally. I buy guitars for an album hoping they’ll have songs in them, which is why I bought the D-18 and the Dove. I also bought a [Gibson] J-55. I had a Dove from the late 60s, but it was too bright.I didn’t like it. It was kind of tinny sounding. But [the ’65] sounds great. I like the way the tune-o-matic bridge sounds; it’s somehow part of the character.”

How did you go about recording drums for Elastic Days?

“I played guitar first, which was tough. It’s easier to play drums first. Playing with a click makes it a bit easier, I guess. I didn’t plan on having drums on the whole album. I was trying to stay more acoustic. But I played drums on one song and then just kept on playing, so it ended up on all the songs. I’d just got this new drum set I really liked – a Ludwig kit that somebody special-ordered in 1970 with a 28-inch bass drum that I like to use.”

Where was Elastic Days recorded?

“In my studio at home. I’ve been working with John Agnello since ’92. I don’t even go up in the room when he’s mixing it. I would just sit in the kitchen. When we’ve been working all day long, we have a system: he mixes it while I sit in the kitchen and he brings down a CD for me to listen to on the stereo. So, instead of sitting me there mixing all day, my ears are always kind of fresh. I don’t have to listen to it a million times and he knows kind of what I like. I’m used to my stereo, so that’s the best place to listen.”

How have you been enjoying the tour?

“Glasgow was the best show. I really liked it. London [at Islington’s Assembly Hall] was good, but it was kind of nerve wracking. It was kind of a big place for me to be playing acoustic, so I was a little nervous. This size [Thekla] is more manageable. When it gets to around 1,000 people, it’s a bit overwhelming standing there alone. You just have to get used to it. I’ve seen Richard Thompson play in bigger venues over the years, but I think he can handle it!” [laughs]"