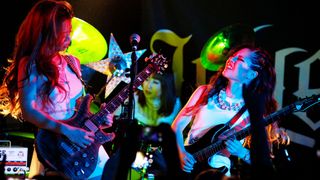 Having written and released three studio albums, two EPs and one live album since their formation in 2016, Japanese power metal quintet LOVEBITES have never found themselves running short of ideas. On latest single HOLY WAR, they sound as urgent as ever, merging thrashy guitars with symphonic grandeur in a way that exudes irrefutable confidence and effortless mastery.

That notion of thunderous sophistication is one that reoccurs throughout the 70 glorious minutes of third full-length Electric Pentagram, released earlier in January. You could say it’s their forte...

“I think the rhythm guitar parts have more detail on this record than they did before,” says Midori, who shares guitar duties with Miyako.

“Not only are there more technical elements, but we have a song with shuffle beats, like The Unbroken, which is new to LOVEBITES, and some songs like Dancing With The Devil and A Frozen Serenade where we paid more attention to the groove. There are also other songs that really keep us on our toes, too!”

“Basically, I brushed up on all the things that I had been doing in the past,” agrees Miyako, who also plays keyboards in the band. “I tried using phrases that I had never used before. Our bonds as a band are now stronger than ever.

"We see LOVEBITES as an electric pentagram, which is an emblem that’s adorned amulets and talismans since ancient times as a symbol of protection. That’s why we felt Electric Pentagram is the perfect title for this album. We are five points brought together to protect heavy metal.”

Here, the two guitarists talk Guitar World through their gear and influences…

What can you tell us about the gear used on the newest recordings?

Midori: “I mainly use the E-II Horizon electric guitar equipped with a Floyd Rose. The high frets are easy to play and the balance of the guitar is good, so it suits my technical playing style. I use two different colors for different tunings.

"I made four other guitars with ESP Guitar Craft Academy (GCA) last year, and I’ve used two of them at our live shows so far. One is based on the ESP Arrow shape. I like the edgy sound and the sharp look. The other is a combination of ESP Ultratone and Snapper. It’s an all-around guitar with a lot of controls, which can make a variety of sounds, but retain its thickness.

"This guitar is the only synchronized tremolo guitar I have. Other than this guitar, all of them are equipped with a Floyd Rose. And they look gorgeous. I feel happy just looking at gold hardware [laughs]!

"As for amps, I mainly use the Kemper Power Rack. The great thing about Kemper is that it lets you play through various amplifiers, vividly recorded from the real sounds. I’ve been using it live for years now, and can rely on it to produce the same sound wherever I go. I don’t need to worry when we’re touring anymore. Even for recording, all I bring is a USB flash drive if the studio has a Kemper.”

Miyako: “The main guitar I use is a Dean USA Icon. I like the wood grain and the sound of it. The amplifier that I’m using is made by Peavey, as I find they tend to specialize in the more metallic sounds I’m looking for.”

Your band is based in Tokyo - how much has the city inspired the music, do you think?

Midori: “When you go out on the street here, you can hear music that you wouldn’t usually listen to actively. I think that the Japanese melodies I hear on the street are reflected in our music.  There are also many live music clubs in Tokyo, and many people come to Tokyo to become professional musicians.

"I think the music scene as a whole is thriving, and in order to survive, musicians are becoming more technically skilled, and more unique and distinctive.”

Miyako: “Compared to the US, Japan is a small country. Here we have cities such as Osaka and Nagoya, but in Japan, everything is concentrated in Tokyo. So it’s convenient for us to be based here because it’s the epicenter of everything.”

As for other guitarists, who have you been most influenced by? There are certainly some moments on the album that nod to shred legends like Marty Friedman and Yngwie Malmsteen...

Midori: “For me, it’s Kiko Loureiro, Nuno Bettencourt, and Yngwie Malmsteen. I think Kiko is very talented, and there are a lot of things I’ve learned from him, he has such as a wide variety of licks and knows how to add nuances.

"I am referring to the Brazilian flavor licks, and the cool way he incorporates fusion-like licks and ideas, inspired by players like Allan Holdsworth, into metal. There are some parts that I practice from his lecture videos. Kiko has studied Marty Friedman’s techniques since joining Megadeth, so he may have been indirectly influencing…”

Miyako: “There are many. My mom loves classic rock, so I’ve been listening to bands like Deep Purple and Rainbow since I was little. I ended up being very influenced by Ritchie Blackmore. But I’ve been influenced by a lot of other modern guitarists as well - out of the current ones, I’m very much inspired by Timothy Henson and Scott LePage from Polyphia.”

What do you think are the secrets to being a good power metal guitarist?

Midori: “Practice! Also, watch and listen to the performances of various guitarists that interest you. Copy what you think is good and then arrange it in your own way.

"To start shredding, you first need to practice at slow tempos. Only speed up little by little, and if you make a mistake, you have to slow down and start over. When you can play the piece with the target tempo plus 10bpm, you can play calmly in tempo.

"Technically, I use most techniques like legato, string-skipping, sweeping, tapping, eight-finger tapping or using the vibrato arm. At the moment, I am practicing a lot of hybrid picking, so that I can use it more freely.”

Miyako: “For me, it really comes to down to being able to write good songs and cool riffs. We like to play guitar solos of course, but always over cool chord progressions. The combination of left and right hand techniques in unison is so important. It can be a challenge for me as well, but if you have a good sense of rhythm, I think it’s easier to develop various techniques. It’s important to remember good rhythm will always make your guitar sound good.”

It sounds like there’s some eight-finger tapping on the album. What’s the best way to master all the necessary co-ordination?

Midori: “Electric Pentagram was actually the first time I’d used eight-finger tapping on an album. All I can say is you need to start by practicing those licks even slower [laughs]!”