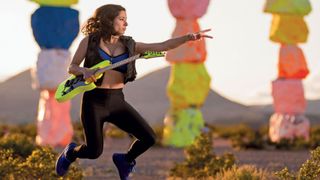 Concept albums have been a staple of rock music in one form or another since the Sixties. Generally a concept album is primarily knitted together by lyrical connections, yet instrumental guitar-oriented music presents a perfect framework on which to build a concept, free of the needs of narrative and lyrical cohesion.

Nili Brosh’s new album, Spectrum, is a heavily conceptual piece with each track fitting onto a carefully thought-out musical concept - that concept being, “How do you make an instrumental album that explores different genres yet still feels ‘of a piece’?”

“Spectrum is really defined by the difficulty of dealing with songs and different genres and figuring out how they possibly could belong on one record,” Brosh says. “It starts with a Spanish nylon-string vibe with Cartagena and Andalusian Fantasy and ends in like a metal/pop/EDM kind of world, and theoretically you should be able to listen to the record in reverse and get the same effect.”

Spectrum flows through into the European folk-inspired Circus Wedding and Parisian-flavored Rachel in Paris with guest accordionist Hubert Gall. That blends into the chill, R&B-inspired Solace, the first point on the record where Brosh’s incredible electric guitar virtuosity truly comes to the fore.

The album then transitions to a more fusion-esque, progressive attitude with Retractable Intent and Desert déjà vu before concluding with the EDM-inspired heavy leads of Djentrification and lead single Primal Feels, the video for which features Brosh backed up by a diverse cast of male dancers from the cast of the Michael Jackson ONE Cirque du Soleil production, which featured Brosh.

“This is my third album and it’s only now that I’m making a real music video,” Brosh says. “I really wanted to wait for the right song that in my eyes of reflects special rather than doing a guitar solo on top of a mountain - something like that! I wanted it to have a purpose and a direction and everything.

"Those guys were in the Cirque du Soleil show with me so we were definitely really used to working together and doing shows and interacting all the time, so while it might seem like a bit of a new direction for me to my fans, to me it was just such a natural thing. I knew it could work and make sense, and I wanted to see how they would interpret something I wrote versus what we do every night with someone else’s music.”

The thing that ties Spectrum together despite its leaps across genres is the strength and personality of Brosh’s note phrasing, which is reminiscent of some of the great “check out the articulation of that note” players like Jeff Beck and Joe Satriani while sounding 100 percent Brosh.

“I think we run into issues with phrasing as guitar players because we don’t have to breathe, you know what I mean?” Brosh says. “Nobody forced us to learn whatever proper phrasing is, because compared to a vocalist we can play on forever and nothing is going to make us pass out if we don’t stop playing!

"So I really try to think from that perspective as much as I can, even if it’s a solo. It’s like you can have a paragraph with a bunch of run-on sentences and everything, and even though the ideas will all be there. It’ll be much harder for the reader to pick out those ideas if there isn’t proper punctuation. So to me, I want to approach music the same way. I know what I want to say, but I want to make sure it’s conveyed properly.”

Brosh is a longtime Ibanez player, initially inspired by the classic Desert Sun Yellow RG550 guitars introduced in 1987 and recently reintroduced via the Ibanez Genesis collection. “When I saw the Genesis RG550, I was like, ‘Oh my God, I’m finally going to get like my dream guitar that made me want to be an Ibanez player!'

"I don’t think I’d ever seen a new one before because growing up in Israel; the few friends I knew that were into the shred music never had one, and you could only get them from eBay. So I never saw a brand-new shiny one in person until I went to pick up my own, and when I opened the case I was like, ‘Oh my God, it’s so yellow!’ I didn’t realize just how perfectly neon it is in person!

“And then I have my two seven-strings that are my go-to guitars,” Brosh continues. “One is an RG2727, which is a Japan-only model that I managed to get my hands on. The other is my RG1527 with the maple neck, which was discontinued right after I got mine in 2012. That’s been my workhorse for many different things. And then I have my semi-hollowbody Artcores. It’s hard to pick a favorite but they do what I need them to do.”