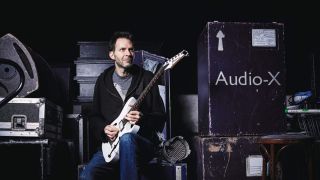 Having found a Gibson Les Paul Custom in the local paper for $300 in his youth, Paul has become an avid buyer and seller of gear throughout his career.

In our inaugural feature on the topsy-turvy world of gear trading, the super-gifted Mr Gilbert talks us through some of his hits and misses, the highs and lows of hunting for electric guitars, and explains why the appeal of Ibanez's most-pointy '80s guitars can be a double-edged sword.

What was the last guitar you bought and why?

“The last guitar I bought was an Ibanez Pat Metheny guitar. He’s had a few different signatures over the years; this one was a bit thinner than the one that came out in the late 90s. I think it was from about 2009 – I don’t remember the exact date – but it’s a thinner body, so you’ve got a fighting chance of it not being a total feedback monster if you do what you’re not supposed to do, which is play through distortion. I bought it on Reverb.com and it’s really cool.”

What was the first serious guitar that you bought with your own money?

“I’d saved up $150 and my uncle, who is a guitar player, came to visit and he looked at the local paper and found a Les Paul Custom, used, for $300. I didn’t have $300 so my parents said they’d pay the other half for Christmas, but they also said, ‘You won’t have any extra money for toys…’ I was 11 and so, ‘No toys?’ but I thought, ‘Okay this is a rite of passage into adulthood,’ so I put in my 150, they put in their 150 and so it was my first Christmas with no toys. Although a Les Paul is a great toy… it’s different than Lego.”

What’s the most incredible find or bargain you’ve ever had when buying guitars?

“That first Les Paul was a pretty good one…”

Have you ever experienced buyer’s remorse after picking up a piece of gear?

“Sometimes it’s really fun to have a pointy guitar and Ibanez made some really pointy ones back in the 80s. There was one, probably inspired by the Randy Rhoads pseudo Flying V, and I got one of those from eBay. It was during the early days of the locking tremolo and it was a bridge that was impossible to find parts for – and it needed parts. It had potential if I could have fixed it, but it was like buying an old car from the '50s.”

Has anything caught your eye in guitar shops lately?

“Not always in a guitar shop, but on the internet there’s always stuff. One guitar I got recently was a Godin. I was with Mr Big and we were doing our acoustic hit and I was having trouble with feedback. Mr Big is a loud band – really loud stage volume – and so when we play acoustic, Billy [Sheehan] doesn’t.

"He’s still going full blast on the bass and those low frequencies really hit the top of an acoustic guitar. You can go out on a soundcheck and it will be fine, but that bass guitar note hits you and ‘Wooooaaah!’

"I did all the things that you’re supposed to do, I put the rubber thing [soundhole cover] in there and I just couldn’t solve it. So I was interested in the Godin because it’s a thinner body, so less likely to feed back, and what I could tell from You Tube-ing, the tone was good. So I got one of those and, man, it was great. After that it was like problem solved: feedback problems gone and a great acoustic sound, so that was cool.”

“There are a lot of good cheap guitars and, again, I don’t really need a super-low action because I’m a higher action guy. For amps, it’s hard for me to be super-objective because my ears are pretty messed up, I’ve got a lot of hearing loss. In the last 10 years distortion pedals and amps really sound different to me; I’ll never know whether it’s the amps that are different or if it’s my ears that are different – I’ve no way of being objective about it. But it feels like the amps and distortion pedals are different.

"When I was a kid I loved that really fuzzy, tons and tons of saturation kind of a sound, but I think that’s because my ears have been so battered it’s hard for me to hear pitch then. I want to hear the notes, I’m sort of fighting for clarity and at the same time trying to get sustain and a certain feel out of the guitar.”

Which one could you not live without: humbuckers or single coils?

“It would be humbuckers. There are some beautiful things about some single coils, especially for funky chordal stuff. But lately I’ve been the lead singer on guitar, doing a lot of single notes with a slide, so I’m trying to get the small strings to sound as big and resonant as possible, and single coils tend to be a thinner, bitier sound. So if you’re playing some fast, funky stuff on the lower strings it’s great, but if you’re trying to get the high E string to be really resonant and full, I like a humbucker.”

What is your favourite guitar store and why?

“I’ve been visiting Japan on and off for a while and I would walk by these little guitar stores and I just assumed because they were so small that they must be not good. But I was completely wrong. I’d walk into this little place in the neighbourhood where my apartment was and it was all acoustics – they probably had 15 acoustics – and I thought, ‘Oh, I’ll just go in…’ and, my God, they had such a cool selection.

"And that’s the thing with Japan in general, it’s a place where there’s not much in the way of physical space; it’s a small place with a lot of people. So a closet will be like a treasure chest because there’s no room for junk, there’s only room for the good stuff.

“I bought a guitar there, it was like a one-off from a luthier in Kalamazoo – maybe he used to work at Gibson, I don’t know – I’d never heard of the guy then or since. I Googled him and he’s the repair guy in some shop, but it’s the coolest acoustic. It’s got a V neck on it, like an old Fender, and it feels like an electric, which is good for me because when I play acoustic I’m basically just playing electric without an amp, but it’s one of my favourite instruments.”