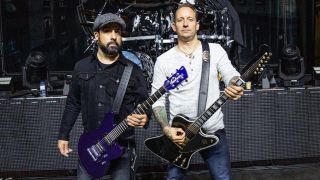 The band's current tour sees Poulsen favoring his Gibson SG GT and Caggiano sporting a Jackson prototype in vivid purple, a color choice rolled over from his ESP days, running into a Fryette Sig:X.

But as the shows have got bigger, so have the demands on their gear, and rigs have grown more complex. Guitar tech Tue Bayer says that Poulsen's beloved Marshall JCM800, a cornerstone of his sound, is “a fiddly old lady”, and so has persuaded the reluctant guitarist that a Kemper Profiler will be more consistent.

Caggiano, meanwhile, is using a custom switching and rack system built by Steen Skrydstrup of Skrydstrup R&D of Denmark that incorporates some Neve 1073 mic preamp secret sauce and brings a little studio fidelity to a live show that’s gotten so big that tech Jerry Carillo now does all Caggiano’s switching.

Poulsen, Caggiano, Bayer and Carillo sat down with Total Guitar to explain how it all works.

Caggiano: “Way back in the day, before ESP, I was playing this quirky guitar called the Outcaster, which was made by Jackson for literally one year, in the early to mid-90s. They were doing a guitar called the Surfcaster, so it’s that kinda thing.

"It’s just an offset body. It has an alder body, maple neck, ebony fingerboard. The bridge pickup is my signature DiMarzio that I developed with those guys back in [pauses] 2011? I guess.

"I was using the Tone Zone for many years. In the neck, I am not totally sure.

Caggiano: “We have a Gretsch electro-acoustic. Like I said before, on the new album there are a few songs where the sounds are a little bit different, and I think the Gretsch hollow-body, the Black Falcon kinda vibe, suits a couple of the songs really well, and obviously the acoustics.

"We got through a bunch of songs into the setlist, and we found that a lot of the older songs were tuned a whole step down and the whole new record is in standard tuning. So the way we had the setlist on the first night, there were just way too many guitar changes and it just messed up the flow of the show.”

Caggiano: “Basically it’s the same company as [VHT]. The only difference is the faceplate and the logo. I have been using the Pittbull Ultraleads since ’97 maybe. With Anthrax, on tour I was using Marshall 2000s, the DSLs, just because they were really easy to find anywhere in the world, and they are a really solid, consistent amp, but in the studio it was always the Pittbull Ultraleads for me.

"When we did the Big Four Tour with Anthrax, Steve [Fryette] sent me his new amp called the Sig:X. At the time it was his latest. That became my amp for that tour and I have been with it ever since. I love it. It's a more versatile amp.

The Pittbull is a three-channel amp also but the clean channel is unusable - for me at least. The clean channel on the Sig:X is a lot more versatile. And the gain, it has all the crunch I need. It’s got that big, classic VHT/Steve Fryette sound. On the Sig:X it’s KT88s [valves].”

Rob's rig uses this Skrydstrup SC1 System Controller for his preset tones. Carillo does all the switching, and there are no pedals onstage.

Rob's setup is fairly byzantine to the outsider, and incorporates two Atomic Amplifier 12's into the rack.

Caggiano runs a Dunlop Rack Module wah and all his other stompboxes are housed in his rack unit.

Caggiano has an Alexander Pedals Oblivion Vintage Delay which Carillo will time out for him.

With 98 per cent of Caggiano's signal being his Fryette Sig: X heads and his signature Jackson Shadowcaster, pedals such as this Spaceman Effects Aphelion Harmonic Overdrive will be kicked in for hot sauce on the solos.

A Strymon Flint has recently been added to Caggiano's effects lineup but so far he is only using the reverb side.

Skyrdstrup R&D posted this pic of Caggiano's Carillo-designed rig after its completion, with the Fryette Sig:X 100-watt heads housed in with a pair of Rocktron HUSH noise reduction units.

Caggiano: "It's a very unique overdrive pedal. It has a very distinct sound and is very fat sounding, which is why I like it. It’s very juicy sounding. I would say that 98 per cent of my sound is the amp (the Fryette Sig:X), so that's the meat and potatoes of my sound.

"For my solos, I kick on something interesting. I use the lead channel on the amp for the rhythm sound and the rhythm channel of the amp with the gain dialed back for the lead sound and I use a pedal in front of it, just to kick it in.”

Caggiano: "It definitely is a hot-rodded Tube Screamer type of vibe. I don’t know what it’s called. We are kicking it around. We have had it here out on the road with us and putting it through its paces but we are not totally sure yet.

"There is something that I like about it but I still think they need to tweak it a little bit. I’m not totally sure. Yeah, it does one thing really, really well, and I just wish it did more stuff . That one is quite hot.”

Caggiano: “We have a Strymon Flint reverb. That is only for certain parts. We literally haven’t even used it yet. [To Jerry] We used it last night!? Oh, we are still dialing it in. Not the tremolo, though. No. We use the reverb side. We have some new songs on this album that have a lot of the tremolo effects so that's why we got this pedal.”

Caggiano: “We started playing those new songs, literally, two days ago! We are still working out the patches and the presets and all that stuff. Jerry will be controlling the timing of all that stuff, the tremolo, and also the delay. That pedal is amazing. I am really diggin’ that delay pedal. But Jerry times it out.”

Caggiano: “There is no audio onstage. No pedals. I mean there is a remote wah running the Dunlop wahs but there is no actual overdrive pedals or anything. The rig has been a dream of mine for a long time. I’m a studio guy. I’m a record producer, so I have a certain thing that I do with guitars that I have always dreamed about implementing into the live show, and finally we were able to do that.

"I wanted to have a cabinet off to the side, mic’d up, going through a Neve 1073-style mic preamp, so there will be a 57/421 on one speaker, and in the same cabinet in another speaker there will be another [Shure SM]57 for the solo sound also going into a 1073 Neve, that goes also into an 1176-style compressor.

"A Neve 1073 is the de facto rock ’n’ roll mic preamp. It is my go-to. That’s what I always wanted to do live, because running the mics into the digital console you lose a lot. Obviously we are using a wireless system, the Shure Axient, and that goes into the spaceship over there.”

Poulsen: “I just got a new one that I have been using in the studio to get used to it, and now I'm bringing it out on the road, and that is the first time since that Gibson SG model that I have been excited about a guitar - because we've been trying a lot of stuff out, not because I was not happy about my Gibson SG GT.

"That is the guitar for me - but sometimes you just become curious to try out new stuff to see how it works, how it sounds, so you know what’s on the other side.

"I started using it when we were recording the new album, and we felt very comfortable about it. It feels great on your body, the weight is great and the neck is great. And most important of all, the sound is great. But it’s Gibson; I’m really dedicated to that brand. It’s regular-sized humbuckers, and the one I use the most is a JB SH-4, the Seymour Duncan.”

Poulsen: "It’s great. I have a Gretsch guitar at home that I'm really happy with. We tried a lot of the Gibson guitars out in the studio, when we were recording Sorry Sack Of Bones and Tue brought it up and I was rehearsing on it a little bit backstage and so far it feels good.”

"I do [practice], but it’s not like I am enjoying it. But sometimes it is just nice to sit down with something that’s not plugged in and electric, because you do have a tendency to write different material on an acoustic guitar. I just don’t feel connected to it."

Poulsen: "I had been using the Marshall JCM800s for so many years, and getting used to that sound, combined with how I played on the Gibson guitar, it kind of became my signature sound. Suddenly, trying to put your trust into a robot was not easy because there are so many options, and to believe that it can capture what you are doing on the Marshall amp was not easy.

"But Tue has been doing a really good job and there is definitely a very close similarity. I would not say that it is 100 per cent but it’s to a level where I agree that it sounds good. Before I was just connecting the JCM800 with a maximizer and equalizer."

Bayer: “I did a capture of that in the studio just to get it with everything on it, because the only way we can replicate that sound is to do it. It’s an old Behringer - a five-band Behringer EQ! It is a Q5 or something, and you might laugh at it but it’s actually such a big part of what the sound is, and I tried various other EQs. I tried one that was $20,000. I mean, I couldn’t replicate it."

The Fractal Axe-Fx III unit is handling Poulsen's reverbs and delays and some of the effects used on the new album. While the Kemper handles the amp profiling and goes to the cabinets, the Fractal's signal goes to Poulsen's in-ears.

Poulsen's rig is switched with a Radial JX62.

Both Poulsen and Caggiano use Shure Axient Wireless Systems.

Bayer: "We just started dabbling with the effects because the guys did a bunch of things on the album with clean sounds, reverbs, delays, stuff like that. Before that it was just distortion, nothing else, totally dry distortion. The way I’ve got it set up now is that everything is going through two Kempers, two Fractals, and then I’ve got
a switcher from Radial Engineering, and a Shure Axient wireless.

"The Kemper is actually running the onstage cabinets because it has got a more real, natural response like an amplifier, and then I am using a Fractal for the in-ears because it sounds a little more like a preamp.”

Poulsen: "I have no idea what you guys are talking about!"